Why F-35s Would Be At the Center of a China vs. Taiwan War 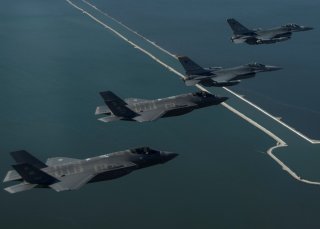 As Beijing grows increasingly aggressive, it is important to consider what military options the United States and its allies would have if China launched an amphibious assault on Taiwan. With Taiwan only 100 miles from the Chinese coast, could a large-scale attack even be stopped?

This question inspires endless speculation, and the Pentagon is thinking about it on a daily basis. Although there are many factors involved, such as the response time of U.S. Navy forces and advanced warning capabilities, the most important variable to consider may be China’s ability to establish air superiority.

Even if China captured Taiwan, it would be challenged to hold it without air superiority. U.S. and allied air dominance, should assets be positioned to respond in time to a Chinese attack, might offer the best chance to stop or repel a Chinese aerial and amphibious assault on Taiwan.

South Korean, Japanese, and Australian F-35s, supported by U.S. Navy carrier-launched F-35Cs and F-35Bs, could offer the margin of difference necessary to prevail against a Chinese amphibious assault. China does not appear to operate a large number of its newer J-20 fighters. In addition, the Chinese carrier-launched J-31 stealth aircraft has not yet been deployed, and it is clear that Chinese J-10s, J-15s, and other legacy fighters are unlikely to rival or match F-35s. With this in mind, China would likely have to carry out an amphibious assault without established air support, something that could allow U.S. and allied air power to repel the entire invasion.

The success of a counterattack against an attempted Chinese invasion of Taiwan would primarily rely upon the range, proximity, and availability of aerial assets. This is one key reason why the U.S. Navy so often “forward operates” in the Pacific theater with carrier strike groups and amphibious ready groups. A single America-class amphibious assault ship, for example, can travel with as many as fifteen F-35Bs capable of supporting aircraft carriers that have an even greater number of F-35Cs. Should there be any kind of warning or credible intelligence suggesting that an attack is imminent, the Navy would be certain to preposition assets in close proximity to Taiwan. It is not likely that China would be in a position to truly challenge a networked contingent of U.S. and allied F-35s while carrying out an amphibious assault.

Proximity and range would also be crucial factors. Fortunately, South Korea and Japan would be able to quickly respond to a Chinese attack with their own F-35s. Japanese F-35s could respond even faster if Japan based them on or near its Southern Islands. Moreover, land-launched F-35s from South Korea or Japan would be able to receive aerial refueling support from a U.S. tanker in order to operate near Taiwan.

Should U.S. and allied proximity, reach, advanced warning, and forward presence enable a rapid response, China’s prospects for a successful amphibious assault on Taiwan would be slim. China’s naval forces may be on a dangerous collision course with the powerful F-35.