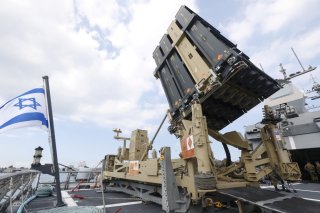 Israel has been repeatedly chastised for not taking on a more active role in Western efforts to arm Ukraine against Russia. In particular, it has been criticized for having blocked the sale of its celebrated Iron Dome missile defense system to Ukraine. This has been attributed in large part to Israeli concerns about irking Moscow as it tries to subdue Ukraine militarily. But other calculations may also explain Israel’s stance.

Since the Iron Dome was developed jointly by the United States and Israel, neither side can sell the technology to third parties without mutual consent, which is why the Israeli government can veto—and has vetoed—the sale of the system to Ukraine.

Initial reports about Israel’s reluctance to supply Ukraine with the Iron Dome system emerged in mid-February 2022—before the Russian invasion even began. But it was during the invasion that the issue would draw far greater global attention, owing to Ukrainian president Volodymyr Zelensky’s public scolding of the Israeli government for allegedly blocking the sale of the system to Ukraine. “Why are we not getting your Iron Dome, that would protect the Jews of Ukraine?” Zelensky asked. Anyone listening to Zelensky would have been forgiven for thinking that the Iron Dome was the panacea for all of Ukraine’s defensive woes.

Much of the commentary on Israel’s blocking of the sale has attributed the decision to Israeli efforts to avoid angering Russia, which is militarily present in Syria. According to this line of reasoning, Israel needs to remain in the Kremlin’s good books if it wants to be able to conduct risk-free bombing raids against Iranian-backed military assets in Syria. A riled-up Kremlin, goes this argument, will have fewer incentives to allow Israeli warplanes to regularly enter Syrian airspace to hamper Iranian efforts to establish a long-term military presence on Israel’s doorstep. Other analysts have explained Israel’s reluctance to supply Ukraine with the system by pointing out the technical and logistical difficulties of shipping the system all the way to Ukraine.

These explanations hold merit. But there may be more to why Israeli leaders aren’t too eager to see Iron Dome deployed in Ukraine: their concern that the Iron Dome technology is not as foolproof as advertised.

The system has been touted by the Israeli defense industry as a singular icon of technological innovation, attaining somewhat of a mythical status, supposedly for having successfully shielded Israel from explosive projectiles being fired from Palestinian militant groups in the Gaza Strip.

Two interrelated parameters have thus far been used to gauge the success of the Iron Dome: the number of Israeli civilians killed by the rockets and the system’s interception rate.

Thanks to the Iron Dome, we are told, “countless” lives have been saved from rockets being fired from the Gaza strip into Israel. But a comparison of Israeli casualty figures before and after the deployment of the Iron Dome reveals a different story.

The ratio of rockets reaching Israel to civilian casualties during the 2008 to 2009 Operation Cast Lead (before Iron Dome’s deployment) was 300 to 1. Significantly, this ratio remained unchanged during Operation Pillar of Defense (2012), which was launched after the deployment of the Iron Dome. In other words, the Iron Dome had little impact on casualty rates. The low casualty rate, according to MIT Professor Emeritus Theodore Postol, is due chiefly to Israel’s impressive early warning system and, to a lesser extent, the modest size of the warheads launched into Israeli territory. Indeed, Israeli officials have at times referred to these rockets as “pipes.” Indeed, as Israel’s 2014 incursion into Gaza Strip (Operation Protective Edge) revealed, the greatest threat to Israeli life—whether it be civilian or military—is not Palestinian rocket fire but urban combat between Israeli soldiers and militants in Gaza.

Related to, but different from, the casualty rate is the question of the Iron Dome’s interception rate. According to the Iron Dome’s developers, the system’s success rate is 90 percent. This stupefying figure has gradually turned into an accepted fact. But missile experts have cast serious doubts over the veracity of this claim. Again, Theodore Postol pegs the success rate of the Iron Dome at “5 percent or, perhaps, even less.” Israel Defense Prize laureate and aerospace engineer Dr. Moti Shefer, whose specialty is missile interception, has gone further, describing the Iron Dome as “a bluff.” The Iron Dome, according to Shefer, “is a sound and light show that is intercepting only Israeli public opinion, and itself, of course. … No Iron Dome missile has ever collided with a single rocket.”

Unsurprisingly, such claims have been rejected by Israeli military leaders.

But even if we flat-out dismiss the pessimistic views on the Iron Dome’s effectiveness and embrace wholeheartedly the official Israeli position on the system’s success, the jury is still out on its reliability against Russia’s fully-functioning air force and its vast array of sophisticated missiles, which can be launched from a broad range of launchers.

This may help explain the Iron Dome’s modest export success despite the system’s supposedly jaw-dropping battlefield success rate. “Normally,” reflected a special 2014 Reuters report on the weapon, “an advanced new weapon system with a battle-proven success rate of 90 percent would have global defense procurement agencies on the phone in minutes. But Israel’s Iron Dome rocket interceptor is yet to prove a hit with buyers abroad.”

The above assessment has since remained largely unchanged.

Despite periodic media reports over the years about a whole host of countries being interested in the Iron Dome, its export success has remained scant, bordering on non-existent. A few countries appear to have reportedly bought the Iron Dome’s radar system (instead of the full battery). The United States—the joint funder of Iron Dome—is thus far the only known buyer and deployer, but it has only purchased two full batteries, despite claims by senior Israeli security officials that there was a potential for the U.S. Army to buy “30 or even 40 systems.” In a testament to American disinterest in the Iron Dome, the U.S. Army initially declined to even purchase the system to protect its forces in Iraq and Afghanistan. The apparent misgivings about the system led to the overall impression that the Army never really wanted the Iron Dome and that the weapon was being imposed on it by Congress. And in the end, when the Army did purchase Iron Dome batteries, it indicated it would suspend further purchases, partly because Israel had declined to provide the U.S. military with the Iron Dome source code. Significantly, the source code would also have revealed how the technology actually works (or perhaps does not work). The Israeli Defense Ministry had claimed that the purchased “batteries will be employed in the defense of U.S. troops against a variety of ballistic and aerial threats.” But instead of using the Iron Dome to defend “U.S. troops against a variety of ballistic and aerial threats,” the U.S. military would deploy one of its two batteries in Guam of all places, where it is more likely to collect dust rather than intercept hostile projectiles.

For an air defense system hailed as the “hand of God,” the Iron Dome does not appear to have impressed the U.S. military.

In reality, no missile defense system—including the Iron Dome—is worthy of such descriptions. Unless, of course, a radical technological breakthrough introduces a fundamental paradigm shift in missile defense that renders the question of replenishing interceptors a non-issue. Until then, leading arms experts agree, every country will have to live with the fact that any missile defense system can be overwhelmed by sufficient numbers of adequate missiles.

And yet, Zelensky’s tirades against Israel over the Iron Dome have left many with the distorted impression that Israel has been selfishly withholding game-changing defensive technology from Ukraine. In actuality, however, it is highly unlikely that the technology would have significantly helped Ukraine on the battlefield.

As Tal Inbar, a leading Israeli authority on missiles and drones, has said, though the Iron Dome could likely intercept some Russian munitions, exporting the system to Ukraine “is more of a theoretical question and wishful thinking by Ukraine” than a practical solution. One reason, according to Inbar, is Ukraine’s far greater landmass. But another, he adds, is that “when speaking of [the] ballistic missiles … the Russians are using, Iron Dome is not the solution.”

Inbar’s observations have been confirmed by Yevgen Korniychuk, Ukraine’s ambassador to Israel. Responding to reports about Israel’s refusal to supply Ukraine with the Iron Dome, Korniychuk said the system had “not been discussed” and that “Russia uses completely different weapons from the Palestinians, so Iron Dome would probably not help us.” Similar views have been echoed by other Ukrainian military analysts.

Israeli military planners are fully aware that Russia’s diverse fleet of sophisticated missiles could lay bare the serious shortcomings of a weapon that has in recent years become a symbol of national pride and military prowess. This could embolden Israel’s foes, especially Iran, which also possesses an increasingly far-reaching, accurate, and destructive ballistic and cruise missile program. This, in turn, would have an adverse effect on Israel’s deterrence capacity vis-à-vis Iran and its allies.