Why Poland Wants a Massive Fleet of U.S. Apache Helicopters 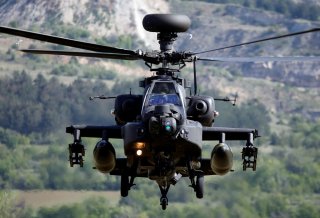 Poland announced that it would like to purchase up to 96 AH-64E Apache helicopters from the United States. The whopping, near-triple digit order would replace the country’s fleet of Mi-24 Hind helicopter gunships, an aged, Cold War-era design—and would also make Poland the largest Apache operator besides the United States Army.

A statement from Boeing, the defense company behind the Apache design, said that they were “honored the Government of Poland has selected the AH-64E Apache for the Polish Armed Forces’ new attack helicopter fleet.”

It added that “an Apache selection strengthens U.S-Polish military ties by enhancing interoperability and cooperation between Poland, the U.S. Army and NATO nations. During the procurement process, Boeing established significant cooperative partnerships across Polish government and industry. Our partnership with the Polish Armaments Group in particular will continue to expand as we implement training and sustainment efforts with local industry.”

This latest order comes on the heels of a significant Polish spending spree on military equipment. The country on NATO’s eastern flank shares a border with Ukraine and is acutely aware of the danger of Russian aggression.

A tweet from Poland’s Mariusz Błaszczak, both the Deputy Prime Minister and the Minister of National Defense, was emphatically positive. “More good news!” Błaszczak said. “We have issued a request for proposal to the US for the acquisition of 96 AH-64E APACHE helicopters in the latest GUARDIAN version for Land Forces Aviation. Along with the helicopters, we will also acquire technology transfer.”

Part of Poland’s swath of new equipment is to replace the extensive inventory of equipment the country has donated to Ukraine. In addition to over 300 armored fighting vehicles, about 110 self-propelled guns, and over 230 tanks, the country has donated a host of small arms and ammunition and is the central hub for western aid flowing into Ukraine.

Poland’s geographical proximity to Russia—as well as the multiple armed struggles it has fought against invading armies, be they Imperial Russian forces, Nazi troops, or the Soviet Red Army—have convinced Warsaw that to be strong is to be safe. And, by opting for arguably the most advanced weaponry in existence today, Poland is making good on that assumption.