Why the Taigei-Class Submarine Eats Lithium-Powered Batteries for Breakfast 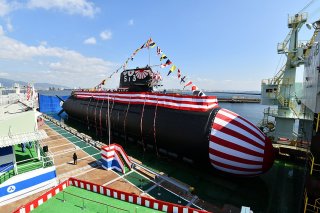 Japan has launched the second boat in a new class of diesel-electric submarines.

The Hakugei, or “White Whale,” was launched at  Kawasaki Heavy Industries shipyard in Japan’s city of Kobe. The Hakugei belongs to the new Taigei-class, introduced in 2018. The Taigei-class submarines are distinguished by their use of lithium-ion batteries, as opposed to traditional lead-acid batteries. Lithium-ion batteries are more energy-dense and can generate a greater power output. Everything being equal, the lithium battery-powered Taigei submarines should be able to travel longer and sustain greater submerged speeds than comparable, similarly-equipped diesel-electric submarines. Citing the results of extensive systems and components testing conducted throughout the 2000s, Japan’s defense industry asserts that lithium-ion batteries require less maintenance. Lithium-powered batteries can also potentially charge faster than their lead-acid counterparts, reducing surfaced downtime in certain scenarios.

The Taigei-class is not the first to employ this technology. The last two models in Japan’s twelve-strong class of Sōryū diesel-electric attack submarines, Ōryū and Tōryū, are powered by lithium-ion batteries; Ōryū is the world’s first submarine to be powered by lithium-ion batteries.  The lithium-ion setup used in the new Taigei submarines is believed to be more advanced than the batteries found in the two Sōryū-class boats, translating into greater range. The Taigei-class will be around one hundred tons heavier than its Sōryū-class predecessor and is designed with a greater emphasis of now-noise performance. The new submarines will also be outfitted with a slew of component upgrades, notably including more advanced sonars.  The new submarines will employ U.S.-made harpoon anti-ship missiles, in addition to Japan’s staple Type 89 torpedoes.

Hakugei was launched exactly one year after the lead Taigei-class boat, Taigei. The submarine is slated to undergo final construction and sea trials before entering service in the Japan Maritime Self-Defense Force in March 2023. Taigei, which is scheduled to be commissioned in 2022, is reportedly slated to be used as a testbed for future Japanese submarine technology. At least four more Taigei-class submarines are planned after Hakugei, with the third boat in the series laid down in 2020.

The Taigei-class submarines are part of a broader Japanese naval modernization and expansion effort, spurred by an increasingly assertive Beijing and continued saber-rattling from Pyongyang. Previously loath to provoke Beijing’s ire, Japanese officials took the uncharacteristic step this summer of openly signaling their support for Taiwan. “We have to protect Taiwan, as a democratic country,” Japan’s deputy defense minister, Yasuhide Nakayama, said in a conference in June. Japan’s shifting stance on Taiwan elicited vigorous rebuke from Beijing, with Chinese foreign ministry spokesperson Wu Qian warning Tokyo that “Taiwan’s business is China’s business. Japan has nothing to do with it.”