Why the U.S. Navy Is Building Another Huge, Mobile Sea Base 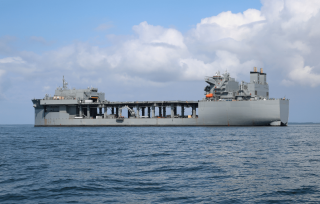 Flying helicopters behind enemy lines, overwhelming enemy surface ships with small boats, conducting clandestine rescue missions and offering a “floating port” from which forces can operate, all demonstrate some of the key reasons why the Navy is increasing its “sea basing” strategy. The service recently commenced construction on its fourth Expeditionary Sea Base (ESB) at the General Dynamics National Steel and Shipbuilding Company in San Diego, California.

The U.S. Navy’s construction of ESBs reflects the service’s increased need to adjust to new kinds of land-based and maritime threats, to include the changing character of amphibious warfare. Navy officials explain that ESBs, as well as some larger “mothership amphibs,” will function as seaports, floating hospitals, logistics warehouses and specific launching bases for expeditionary attacks.

The ESBs are engineered with a flat-top flight-deck helicopter landing area and side pocket areas from which to launch Rigid-Hull-Inflatable Boats for small, fast strike, rescue or reconnaissance missions. They also have ammunition storage, command and control facilities as well as a “reconfigurable mission deck area” to store force equipment such as mine sleds and small boats. The ESBs can also naturally function as floating command and control bases from which to operate attack missions or coordinate large fleets of autonomous surface, air or undersea drones.

A 2014 paper from the Marine Corps Association, the professional journal of the U.S. Marine Corps, points to sea-basing as a foundation upon which the Navy will shift away from traditional amphibious warfare.

In effect, future “ship-to-shore” amphibious attacks will look nothing like the more linear, aggregated Iwo Jima assault. A Naval War College essay on this topic both predicts and reinforces this kind of modern strategic thinking.

“The basic requirements of amphibious assault, long held to be vital to success, may no longer be attainable. Unlike the Pacific landings of World War II amphibious objective areas could prove impossible to isolate,” the paper, called Blitzkrieg From the Sea: Maneuver Warfare and Amphibious Operations, states.

The essay, written in the 80s during the height of the Cold War, seems to anticipate future threats from major-power adversaries. Interestingly, drawing from some elements of a Cold War mentality, the essay foreshadows current “great-power” competition strategy for the Navy as it continues its transition from more than a decade of counterinsurgency to a new threat environment. In fact, when discussing its now-underway “distributed maritime operations” strategy, Navy leaders often refer to this need to return its focus upon heavily fortified littoral defenses and open, blue-water warfare against a near-peer adversary—as having some roots in the Cold War era.

Seabasing also of course introduces additional multi-domain operational flexibility, offering new points from which to attack, project power or launch small-boat Special Operations missions. For instance, the Commander of Air Force Combatant Command, General James Holmes, says it is important for cross-domain attack forces to decrease their dependence upon known, fixed-sites from which to operate near enemy territory.

“With the situation we are in with Russia and China, if they know they only have to target 10s of airfields, or even 100 ports and airfields where we have to get resources to get close enough to operate, we simplify their problem. What can we do to move away from our dependence upon those ports and airfields?” Holmes told Lieutenant General Dave Deptula (retired), Dean of the Mitchell Institute for Aerospace studies in a recent interview.