Why the U.S. Navy Faces a Fighter Pilot Shortage 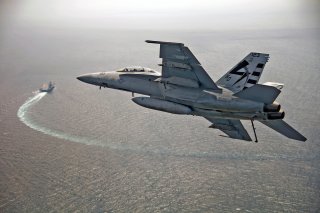 The United States military has a serious pilot shortage. The United States Air Force first warned lawmakers in March 2018 that the service had a shortfall of 10 percent or roughly twenty-one hundred of the twenty-one thousand pilots needed to execute the National Defense Strategy. While the shortfall isn’t as significant, the U.S. Navy is also facing a fighter pilot shortage.

In the case of the Air Force, it is a combination of not keeping trained pilots while pilot production has not been able to keep pace with those leaving the service. For the Navy, the shortage of about ninety fighter pilots has come as the result of a rash of technical and safety problems, Defense News first reported.

The issues have included problems with oxygen flow to the pilots, which can cause negative and unsafe physiological responses in pilots and trainees, while there have been readiness and engine trouble. All of this has resulted in an extended time it takes to train a fighter pilot from three to four years. That has in turn created a gap in the number of pilots in the fleet.

“We can’t just snap our fingers and produce those immediately,” warned naval air training chief Rear Adm. Robert Westendorff during the virtual Tailhook symposium that was held earlier this month.

“The time to train of a strike fighter pilot is about three years; due to the bottlenecks we’ve had, it’s getting closer to four years,” Westendorff added. “We’re doing everything we can to get that back down to the three-year mark. But the recovery plan is a three-year plan. And if we stay on track, it should take us about three years.”

One of the issues, reported Defense News, has been the shortfall of F/A-18 Super Hornets in the fleet. Naval Aviation has been focused to resolve the issue and bring the numbers back up, but many of the jets have been sidelined with technical issues.

Despite Westendorff’s dire warnings, it isn’t clear what the Navy is actually doing to address its pilot shortage. However, the other branches of the U.S. military are taking various approaches from creating new training methods to taking the time-proven method of throwing money at the problem.

For its part, the U.S. Air Force has already begun to introduce a number of advanced tools including virtual reality (VR) to help train F-35, F-22 and F-15 pilots. In August, Air Force announced the inauguration of the new Virtual Test and Training Center (VTTC) at Nellis Air Force Base (AFB), Nevada—which will house the future of joint-aerial combat training.

In addition to speeding up the production of pilots, VR could also help ensure U.S. pilots are getting the realistic combat training that traditional real-world training conditions have been unable to provide.

The Marine Corps’ pilot shortage has become so great this earlier this month the service announced that it will give out an aviation bonus of up to $210,000 for select pilots who are willing to extend their service commitment by up to six years.

“The AvB is a special pay utilized to increase the inventory stability of the aviation officer population. The program provides a proactive, short-term incentive for aviation officers in certain grades and communities with current or forecasted inventory shortfalls,” stated the MARADMIN, which was written by Lt. Gen. David Ottignon, deputy commandant for manpower and reserve affairs.

Gen. Ottignon wrote that the AvB is to provide “a proactive, short-term incentive for aviation officers in certain grades and communities with current or forecasted inventory shortfalls.”