Why the U.S. Needs a Larger Military Budget 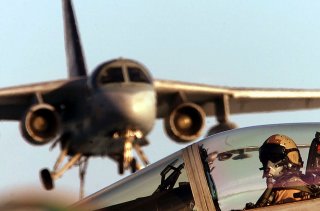 Hundreds of next-generation, highly precise, reliable, and lethal intercontinental ballistic missiles, a fleet of nearly 150 new stealth bombers able to strike anywhere on earth, and a five-hundred-ship, heavily armed Navy are but merely a few of the hopes espoused by people who are in favor of a larger defense budget. These same people would like to see a corresponding continued push toward massive U.S. military modernization and technological superiority. How can the United States build all of these weapons, capable of destroying millions, to keep the peace. Can superior weapons ensure that they never have to be used? It may seem to be a bit of a contradiction in terms, to prepare for a mission for the specific purpose of not having to perform the mission yet it is the fundamental paradox of strategic deterrence and the reason why many advocate for a robust and superior U.S. nuclear arsenal, a large, high-tech and dominating fielded military force and a relentless drive toward new generations of innovations likely to help achieve and maintain military overmatch for decades into the future.

What is the basis for this thinking? It is the notion that an overwhelmingly superior military force can, to a certain extent, contradict its own existence by favoring, ensuring, preserving or even creating peace.

Enlightenment philosopher Thomas Hobbes called it the “state of nature,” a term referring to the natural disposition or sensibilities defining the essence of mankind, as being in a state of “perpetual motion and chaos.” While certainly not without a detectable measure of pessimism, Hobbes’s delineation of man’s fundamental condition as one characterized by a desire for self-preservation and a fear of a violent death contributed to the philosophical foundation upon which liberal democracy in America was built. The optimism, therefore, to the extent to which can be argued, is not so much in Hobbes’s description of the fundamental self-interested nature of mankind, but rather the method through which man’s nature can be accommodated by or successfully integrated into a political society.

Famous for describing life as “nasty, brutish and short,” Hobbes introduces the intellectual framework through which man’s individual nature can be reconciled with the health of an entire society. Essentially, this takes place through the realization of consequences and the extent to which the structure of civil society can address and remove man’s fear of death, and instead help ensure preservation.

In his famous Leviathan, Hobbes envisions political society in terms of a Commonwealth, a structure resulting from an agreement into which man willingly enters to ensure his own preservation. Since a civil society can, through things like a police force or governing body, ensure the preservation of the individual by enforcing laws, man is willing to relinquish many of what Hobbes calls his natural “appetites and aversions” to behave accordingly in a society governed by laws and maintained by an authority such as a police force.

In essence, Hobbes argues that society and stability can be achieved and sustained by accommodating man’s fundamental desire for preservation, therefore offering an opportunity for the individual to choose to willingly enter the Commonwealth. Hobbes referred to this as a covenant, or mutually binding agreement into which parties enter willingly. Thus, this is the premise for “government with the consent of the governed.” Does this sound familiar? As one of the contract theorists who inspired democracy in America, Hobbes maintained that man’s fundamental self-interest and fear of death could serve as a stabilizing force in society because rules, laws, societal structures and institutions are able to ensure man’s preservation.

Hobbes described the state of nature as a war of “all against all,” meaning that self-interest would reign supreme, yet what he proposed was something which came to be regarded as quite brilliant and impactful by historians. This idea that  the preservation of the individual “equals” and “aligns with” the preservation of the Commonwealth, as both are intertwined.  The self-interest of the individual is upheld by the Commonwealth which can maintain order and thus address and remove man’s fear of a violent death.

By describing the sphere of international relations as analogous a “Hobbsian” state of nature, due to the absence of any higher international authority or enforcement mechanism of some kind among nations, many theorists and historians have maintained that countries will simply act in their own self-interest to the greatest extent their power allows them to. The only way to maintain peace, or ensure the status quo, the thinking extends, is to introduce a deterrent through the presence of countervailing power. Less pessimistic views of human nature, such as those which see the human soul as fundamentally more compassionate and altruistic, might be more inclined to think countries might show restraint even if they did not have to or face consequences for not doing so. One of Hobbes’s contemporaries and fellow enlightenment thinker, Jean Jacques Rousseau, argued in favor of what he called a “noble savage” concept, maintaining that a clear measure of altruism was innately woven into the human disposition. Perhaps a fundamental or defining compassion or nurturing sensibility are equally fundamental to human nature. Even with that being the case, allowing a country the ability to impose its will or pursue its interest unchecked by consequences introduces a measure of risk many nation-states are likely to consider unacceptable. It certainly does not seem as though Hobbes would recommend that countries rest their very survival upon the tenuous or uncertain prospect that rival countries will act out of goodwill. Should Russia or China have an established ability to dominate, take over or control the United States, would that show restraint? Is that a chance worth taking? Should the United States allow its military capability to surpass its military capability unchecked by superior or equivalent power?

Accordingly, a strong and well-prepared military able to ensure significant consequences for countries who might wish to invade, take over or merely intimidate another, is the only actual method to prevent bad actors from imposing their will. Countries will pursue their own ambitions to the fullest extent their power allows them to, potentially making the presence of opposing forces, and the assurance that any hostile act will be met with serious consequences, the only way to actually improve the prospects for peace.

This fundamental paradox, in which the international community can be likened to a “Hobbsian state of nature,” provides the conceptual inspiration for strategic deterrence. Ultimately it is simple to an extent. What might stop a country from attacking another? The assurance of catastrophic consequences at the hands of a capable enemy force. The reasoning is based upon a clear and linear equivalency of sorts: weapons, power, and military force, which keep the peace.

This concept supports the reasons why people maintain that the only way to ensure war with a major power like China does not happen is by achieving and sustaining substantial military superiority.