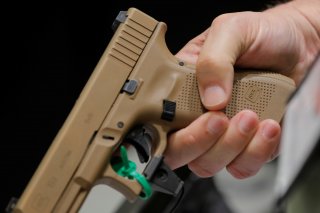 From 1911 until 1986, the Colt M1911—also known as the Colt Government or simply “Government”—was the standard-issue sidearm of the United States Armed Forces. The John Browning-designed .45 caliber handgun was everything a soldier could want, until the U.S. Army decided to go in another direction and adopted the 9mm Beretta M9 as its replacement.

While there were several factors involved, including the Department of Defense (DoD) decision to synchronize the weapon for all five branches of U.S. forces, it wasn't without contention. The M9 may be the standard-issue sidearm, but it is far from the only sidearm employed today by the U.S. military.

The Glock pistol has become a favorite among law enforcement and it now accounts for upwards of 75 percent of the police handgun market, and in recent years it has become favored by every elite unit in the military. Yet, it wasn't instantly loved—the U.S. Armed Forces had transitioned to the Beretta and weren't about to go through another switch.

However, some elite units saw a need for something with a bit more "stopping power" than what the 9mm M9 offered, and the operators in Delta Force began to use the Glock 22, a .40 Smith & Wesson caliber pistol that was developed with law enforcement in mind. This handgun was very similar to the original Glock 17 but carried fifteen of the heavier, fatter rounds. It soon became the most popular police handgun and from there was noticed by Special Forces warfighters, who started to use the gun around 2003 or 2004.

There was also the need for a more concealable handgun for operations and that is when the U.S. military took note of the Glock 19. The Naval Special Warfare Command decided to phase out the Sig Sauer P226 in favor of the Glock 19 for use by its SEAL Teams. The Glock 19 offered everything that shooters had come to love in the Glock 17, but in a slightly smaller package.

The USMC followed by adopting the Glock 19M as the "M007 Concealed Carry Weapon" in 2016 for those Marines who had a need for a compact pistol—such as criminal investigation units and the crews of the HMX-1 helicopter squadron. The Marine Corps requires that all accredited Marine Corps Criminal Investigators, both civilian and military, be armed with a concealable pistol when on duty in civilian attire, but not readily identified as being armed. A typical Glock 19 is more than an inch shorter overall than the M9 and more than three-tenths of an inch narrower—while the lightweight polymer frame also means the Glock handgun weighs less with a full 15-round magazine than the Beretta weighs when empty.

In recent years the Glock has become preferred across the American military services. The Marine Special Operations Command has selected Glock 19s for its elite Raider unit, and even Delta has transitioned to the Glock 19—deciding the 9mm version suffers from less wear that the .40 caliber Glock 22s.

Even as it is unlikely that the Glock will ever become the standard-issue sidearm, it will likely remain the preferred choice for those elite operators that actually get a say in what they want to carry.