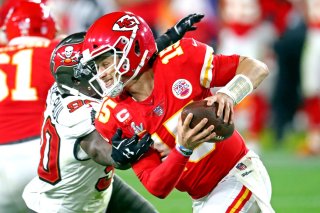 The NFL offseason is in full swing, and superstars like Russell Wilson, Deshaun Watson, and Tyreek Hill have all changed teams in the last few weeks. Even announcers are getting massive paydays, with Troy Aikman and Joe Buck jumping from FOX to ESPN, and legendary announcer Al Michaels leaving NBC’s Sunday Night Football booth to take over play-by-play duties on Amazon’s new Thursday Night Football package.

However, the biggest deal of the NFL offseason is yet to come—the new home for the NFL Sunday Ticket package.

The package, which makes a full slate of out-of-market games available to fans each Sunday, has been largely exclusive to DirecTV ever since it first launched in 1994. In addition to household viewers, Sunday Ticket is offered at numerous restaurants and bars, where it’s become both an important part of bars’ business models and a part of the Sunday routine of countless football fans.

Changes are likely coming to Sunday Ticket. DirecTV’s deal, which was extended as a condition of the AT&T/DirecTV merger in 2016, expired after the next NFL season, and the league has made it known that it wants a streaming partner for the package.

Reporting over the past year has indicated that the major bidders include tech giants Apple and Amazon, as well as more traditional media companies like Disney/ESPN and Comcast/NBCUniversal. The latter two have long been in business with the NFL as broadcast partners, while Amazon is the league’s only existing exclusive streaming partner. Apple, meanwhile, recently announced its first-ever sports broadcasting deal, grabbing a package of weekly Major League Baseball Friday night games.

Different bidders have been described as the frontrunners in various reports, and the NFL is also reportedly selling off a stake in its media arm. It’s also been reported that DirecTV, which is now an independent company after being spun off from AT&T, could retain the satellite portion of the package.

Who has a leg up in the talks? This week a podcast that covers sports business and entertainment offered its thoughts.

Who Gets the Ticket?

Appearing on The Town, a podcast produced by The Ringer, Josh Pyatt, an executive at WME Sports, discussed with host Matthew Belloni the future of Sunday Ticket, and specifically which company needs it the most.

Pyatt pointed to Amazon’s investment in sports overall, saying that the company  “wants it most.”

“I think you have to look at Amazon,” the agent said. “They went out and got the NFL package, they’ve been very aggressive. It’s the first time a streaming service has held NFL rights exclusively. But they’ve also been very aggressive in European soccer.”

But Apple is a contender as well. “I think Apple recently, with their rights acquisition of Major League Baseball games, they’re starting to kind of get into it.”

He added that not many major sports rights are available, as the rights for regular weekly NFL broadcasts are now locked up for a decade.

Then the host asked his guest point-blank who he thinks will acquire the Sunday Ticket package and who needs it the most.

“[As to] who needs it the most, I would probably say Apple, because they’re not in the NFL business,” Pyatt said. He added that both Apple and Amazon are massively profitable, so neither quite “needs” to bid on the NFL. And he didn’t give a clear prediction of which bidder will end up with the Sunday Ticket package.

“I think if these guys are going to get into the sports space, which they’ve all acknowledged they’re doing, then having something associated with the NFL is massively important… if you’re Amazon, and your Q3 revenue number is $80 billion, that should scare the shit out of these other companies.”

He added that since Apple launched original content, it has spent a lot of money, but hasn't been “stupid" about it, making methodical decisions.

The agent also said that the loss of Sunday Ticket could mean big trouble for the satellite service. “Different people have different kinds of stages about why they cord-cut,” Pyatt said. “The NFL is that powerful... to me, that could create a big dent in what DirecTV does. I don't know if I’m going to keep DirecTV if that happens.”