Will This Russian Plan To Counter U.S. Abrams Tanks Work? 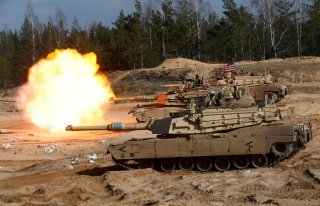 A new Russian weapons development may increase risks to the U.S. Army’s Abrams main battle tank, depending upon its effectiveness and the extent of survivability-enhancing upgrades to the tank.

Russia’s TASS news agency is reporting that industry developers in the country are working on an upgraded RPG-7V2 grenade launcher to increase firing capacity and anti-armor lethality. The new weapon is already under contract with the Russian Defense Ministry, according to the news agency.

“Specialists will increase the grenade launcher’s accuracy with new sights. Today, the RPG-7V2 boasts an accuracy of around 40-50 cm per 150 meters of the direct fire range,” TASS reported.

A need to achieve longer attack ranges is at the heart of the Russian upgrade attempt, perhaps in response to the arrival of newer, higher-resolution and longer-range Abrams tank targeting technologies. The goal, Russian developers reportedly say, is to engineer an ability to destroy enemy tanks at ranges up to 1km.

While there was no particular date or timeline specified as to when this might be ready for combat, the prospect is likely to get some attention at the Pentagon. However, there are several factors to consider when it comes to a threat of this kind, particularly when it comes to some of the particulars as to what danger this might pose in relation to Abrams tanks survivability upgrades.

Initially, what comes to mind is that an Abrams tank, of course, can operate with rocket-propelled-grenades-stopping “reactive armor” which causes an external explosion outside of the vehicle upon arrival, thus preventing any armor penetration of the tank itself. Secondly, while damage assessments and the specific effect of particular weapons upon an Abrams tank is likely to be one of those things completely removed from the public eye for security reasons, there are a number of innovations in recent years likely to bear prominently upon this.

The Abrams tank is now equipped with a high-functioning Trophy active protection system which relies upon an integrated system of sensing, advanced computing, fire control and interceptors to find, track and destroy an approaching rocket-propelled grenade or anti-tank guided missile prior to impact. These defenses have proven effective in numerous live-fire tests against attacking rocket-propelled grenades. Also, while specific ranges of thermal sights, targeting sensors or electro-optical cameras on the Abrams tank are also not likely to be available for obvious security reasons, more recent variants of the tanks are getting massively upgraded third-generation Forward Looking Infrared Sensors which greatly improve image fidelity as well as likely extend detection ranges. Yet another area of improved Abrams tank survivability, also likely to be closely held, is the various add-on armor configurations or composite materials added to the vehicles.

This means that, despite Russia’s rather transparent attempt to counter improved sensors of the Abrams tank with longer-range more lethal rocket-propelled grenades, there is little assurance as to what, if any, kind of impact it may have.