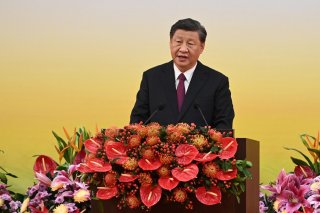 Chinese leader Xi Jinping arrived in Hong Kong on Thursday to commemorate the twenty-fifth anniversary of the territory’s handover to China—an anniversary that his government has celebrated as the beginning of a “new era,” even as critics pointed to Beijing’s crackdown on the 2019-2020 pro-democracy protests.

Xi’s visit to Hong Kong marked his first trip outside mainland China since the spread of the Covid-19 virus in December 2019. In addition to commemorating the anniversary of the handover, the Chinese leader swore in Hong Kong’s new Chief Executive, John Lee—whose role as Hong Kong’s security chief during the territory’s monumental 2019-2020 protests led to his inclusion on a U.S. sanctions list. Lee replaces controversial Chief Executive Carrie Lam, who led Hong Kong’s government through the protests and the subsequent passage of a sweeping national-security law curtailing political freedom in the city. Lam also oversaw Hong Kong’s response to the Covid-19 pandemic, including extremely stringent border controls and local lockdowns to maintain the government’s “zero-Covid” policy.

Although the festivities commemorating the handover began on Thursday morning with a flag-raising ceremony in Victoria Harbor, Xi did not arrive until the afternoon. In the run-up to his entry, thousands of Hong Kong police were deployed throughout the territory to maintain order and discourage further protests.

“My heart—and the central government’s heart—are always with the Hong Kong compatriots,” the Chinese leader told the press immediately after entering the city, which he claimed had “risen from the ashes” following its cession by the United Kingdom.

During its colonial era, Great Britain annexed the island of Hong Kong following the end of the First Opium War in 1842 and secured the “New Territories,” the larger peninsular region of the territory, via a ninety-nine-year lease in 1898. Although the Chinese government under Mao and Deng Xiaoping pressured London to return the territories in advance of the lease’s expiration, all of it was ultimately returned on schedule on July 1, 1997.

In recent weeks, the Chinese government caused controversy within Hong Kong by introducing a new edition of the territory’s history textbooks, claiming that it had never formally belonged to Great Britain, as the Chinese government did not recognize the “unequal treaties” ceding the island. The textbooks also refer to the 2019-2020 protests as “severely violent events … posing a threat to the sovereignty, national security and benefits of Hong Kong” and alleging that they had been organized by unspecified “foreign forces.”