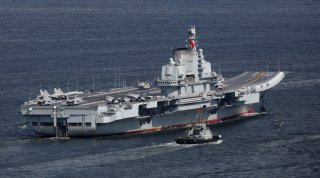 The People's Republic of China has been making great strides with its naval capabilities and that includes more than warships. This week, the People's Liberation Army Navy's (PLAN's) announced that its first aircraft carrier-based, fixed-wing early warning aircraft successfully made its maiden flight last month. The Xian KJ-600 could provide the PLAN with far-reaching eyes while significantly boosting the comprehensive combat capability of its aircraft carriers, which have until now relied on helicopters for early warning purposes.

The PLAN currently operates two carriers—the Soviet-era Liaoning, which entered service in 2012; and the Shandong, the first domestically-built carrier based on the same design, which is currently undergoing preparations to fully enter service by the end of this year.

The KJ-600 was reportedly spotted near Xi'an, the capital of Shaanxi Province in northwest China. It is a twin-engine, high-wing cargo aircraft that has been developed as an early warning and control aircraft. It reportedly uses two WJ-6C turboprop engines, but a report cited by the Global Times suggested the engines could be replaced by the newer WJ-10s in the not-too-distant future.

The plane has more than striking resemblance to the Grumman E-2 Hawkeye, which remains a particularly important asset for the U.S. Navy because of its state-of-the-art radar system. It is also not clear however if the KJ-600 can actually operate on the Liaoning and Shandong¸ which use a "ski-jump" flight deck instead of catapults to launch aircraft. However, the PLAN's planned third aircraft carrier is expected to utilize a flat flight deck and launch aircraft via an electromagnetic catapult, which would be fully compatible with the KJ-600.

Analysts have predicted that China's goal is to operate six carriers by 2035, but to truly rival the U.S. Navy's far reaching capability would require being able to get that early-warning eye in the sky capability. The KJ-600 could even allow the Chinese to surpass the United States in some capabilities, thanks to the Chinese military's efforts to develop data linking technology, which could allow AEW planes to guide other aircraft as well as help target long-range missiles.

It is not China's first attempt to develop an aerial early warning (AEW) aircraft and back in 1969 the People's Liberation Army Air Force (PLAAF) deployed a Russian-built version of the U.S. B-29 bomber with a radar dome strapped to the top.

The PLAAF and PLAN now operate at least a half-dozen different types of land-based AEW aircraft, but none are up to the standards of the American E-2 and E-3 Airborne Early Warning & Control planes (also known as AWACS). As a result, Chinese carriers have had to rely on early warning helicopters, which can only carry smaller radars and have limited speed. Such rotary aircraft can only cover a radius of about 200 kilometers, while a fixed-wing early warning aircraft could cover about 400 to 500 kilometers in the same period of time.

Israel had planned to sell China AWACS aircraft in 2001, but pulled back from the deal under pressure from the United States, and recent deals have also been scrubbed. Yet, earlier this month Israel announced that it would sell its Phalcon AWACS to India. Under a $2 billion agreement, Israel and India would jointly manufacture arms supplies and defense equipment including the "eyes in the sky" aircraft.