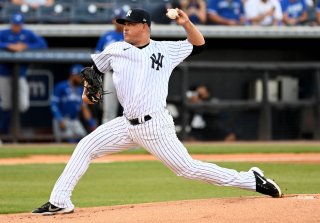 Now, there’s word that one of baseball’s most storied franchises has made a streaming deal of its own.

The New York Post reported Thursday that the New York Yankees have reached a deal with Amazon to stream twenty-one games this season on Amazon Prime Video. The games will mostly be on Friday nights, putting them directly up against Apple’s weekly games. The Yankees, the Post said, will be on two of the first twelve Apple games that were announced so far.

Last year, Amazon streamed some games in the New York market that were also available on local broadcast station WPIX, making it available to non-Prime subscribers. But the WPIX component will not continue in the 2022 season.

The author of the Post piece, Andrew Marchand, said on Twitter that out-of-market fans of the Yankees will not be affected by the Amazon deal, and will still be able to watch Yankees games on the MLB.tv service for out-of-market games.

The twenty-one games, which will only be available in the Yankees’ home market, are only about 13 percent of the 162 game schedule, but that’s a sizable chunk of the season that won’t be available on the YES Network, the team-owned regional sports network that shows the majority of Yankees games.

Amazon also has an ownership stake in the YES Network, as does Sinclair. The YES Network team, led by play-by-play man Michael Kay, will call the Amazon games. The first game is set for April 22, between the Yankees and the Cleveland Guardians.

Financial terms between the Yankees and Amazon have not been disclosed.

The match-ups for the first run of games on Apple TV+ was announced this week, with two games taking place each week between April 8 and June 24. Those first games will be available free of charge to anyone with Internet access, although after the initial slate they will require a subscription to Apple TV+.

Apple, which announced the baseball deal as its first sports rights agreement, is reportedly bidding on the NFL’s Sunday Ticket package for out-of-market games, although there has been no resolution yet to that bidding.