Yes, Russia's Old Strategic Bombers Are All Over the Place Lately 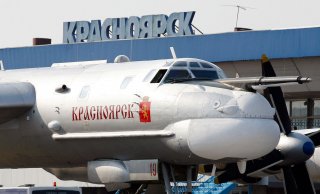 Russia’s aging Tu-95MS strategic bombers have been racking up the miles in recent weeks. Four of the Cold War-era warbirds of the Russian Aerospace Force (Air Force), which are a key element of the air component of Russia’s nuclear triad, performed a planned flight over neutral waters of the Chukchi, Bering and Okhotsk Seas and the northern part of the Pacific Ocean.

The venerable Tu-95MS strategic bombers, seen as the face of the Aerospace Force, have been upgraded to carry the latest X-101 cruise missiles. Those missiles can be retargeted once the bombers are already airborne.

The Tu-95 is a four-engine propeller plane that was developed 60 years ago. As The National Interest has reported, “Soviet planners requested in 1950 a four-engine bomber that could fly five thousand miles to hit targets across the United States while hauling over twelve tons of bombs. The jet engines of the time, however, burned through fuel too quickly. Thus, the design bureau of Andrei Tupolev conceived of an aircraft using four powerful NK-12 turboprop engines with contrarotating propellers.”

Despite the age, the aircraft can still fly great distances and have been making practically regularly flights near American waters.

“Four Tu-95MS strategic missile-carrying bombers of the Russian Aerospace Force’s long-range aviation performed a planned flight in the airspace over the neutral waters of the Chukchi, Bering and Okhotsk Seas, and also the northern part of the Pacific Ocean,” the Russian Defense Ministry told state media on Wednesday.

“The aircraft took off from the airfields in the Chukotka Autonomous Area and the Amur Region,” the ministry added. “The aircraft of Russia’s Aerospace Force perform all flights in strict compliance with the international rules of using the airspace.”

The Russian Defense Ministry also reported that at sections of the route the Russian aircraft were escorted by U.S. Air Force F-22 fifth generation fighters.

This was the eighth such incident of Russian bomber formations flying off Alaska’s coast this year, according to the North American Aerospace Defense Command, and the second this month.

“For the eighth time this year, Russian military aircraft have penetrated our Canadian or Alaskan Air Defense Identification Zones, and each and every time NORAD forces were ready to meet this challenge,” Air Force Gen. Terrence J. O’Shaughnessy, who commands NORAD and U.S. Northern Command said in a statement issued Wednesday. “Despite the COVID-19 pandemic, NORAD constantly monitors the northern approaches to our nations and our operations make it clear that we will conduct homeland defense efforts 24 hours a day, 7 days a week, 365 days a year.”

It was just last week that four Tu-95Ms strategic bombers—possibly the same aircraft—conducted a patrol flight near Alaska. As with this week’s incidence, the Russian bombers were intercepted and escorted by U.S. F-22 fighter jets.

The U.S. and its NATO allies have paid similar visits to Russian waters. Last week the movements of the French guided-missile frigate Aquitaine in the Barents Sea were closely tracked by the Russian Northern Fleet, while last month four U.S. Navy warships from the U.S. 6th Fleet (C6F), along with one Royal Navy vessel, entered the Barents Sea to conduct maritime security operations, assert freedom of navigation and to demonstrate seamless integration among allies. It was the first time U.S. and British warships had operated in the Barents Sea since the Cold War.