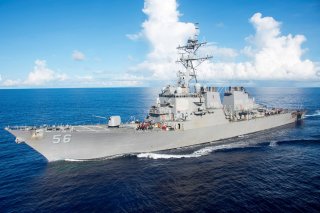 The U.S. Navy could quite possibly operate thousands of combat ships in the coming years as the service seeks to combine surface, air and undersea drones into its fleet.

It is part of a formal Integrated Force Structure Assessment in which analysis teams led by the Chief of Naval Operations and Marine Corps Commandant explored questions of fleet size in relation to fast-emerging man-unmanned teaming integration.

“[W]e came up with a discreet number of ships which was more than 355 and then command and control drone networking separately unmanned,” Admiral Michael Gilday, Chief of Naval Operations, said earlier this year at the Navy’s 2020 West Conference in San Diego, California.

The assessment, Gilday explained, was not so much “coordinated” as “integrated,” taking up a blend between a specific number of planned manned ships and a still “conceptual” number of drones.

This is quite significant because Navy modernization and weapons development leaders have consistently emphasized the reality that larger “mothership” manned platforms such as amphibious assault ships will likely control fleets of hundreds of drone boats.

Ongoing technological progress with artificial intelligence and cross-domain operations is bringing the promise that small numbers of humans will likely be able to operate large numbers of networked undersea, surface and air drone platforms.

The Navy’s current Ghost Fleet project is already demonstrating how groups of Unmanned Surface Vehicles can draw upon AI, computer automation and advanced networking to operate in tandem, coordinate attacks and share information in real-time, autonomously.

While still ultimately organized and commanded by humans, the fleets of drones will be able to, for instance, test enemy defenses while lowering risks to sailors. Drone ships could also conduct forward attacks and share real-time navigational data and aggregate threat information. This could include things such as finding and destroying mine threats, enemy land forces, air vehicles and facilitating connectivity between undersea mine-hunting drones and surface ships.

A quick look at the Navy’s current drone programs is already showing indications of this kind of strategy, which synchronizes fully with the Navy’s stated Distributed Maritime Operations (DMO) strategy. Among other things, DMO calls for the prospect of disaggregated yet networked lethal force enabled by long-range communications systems, sensors and weapons.

The Navy is now moving quickly to acquire an entire fleet of unmanned surface drones, including Small, Medium and Large Unmanned Surface Vehicle programs. Concurrently, the Navy is also fast-tracking a new fleet of underwater drones such as the Large Displacement Unmanned Underwater Vehicle (UUV), Xtra Large UUV, Medium Displacement UUV and a group of micro-UUVs.

A Navy fleet, including thousands of drones, was anticipated as far back as 2017 in the services “Undersea Warfare Technologies” paper. In fact, the number of planned drones has likely risen considerably since this time.

“It is foreseen that there will be several XLDUUVs, potentially tens of LDUUVs, hundreds of Medium Displacement UUVs (MDUUVs), and possibly thousands of micro-UUVs. Each will offer its own unique set of capabilities,” the paper states.