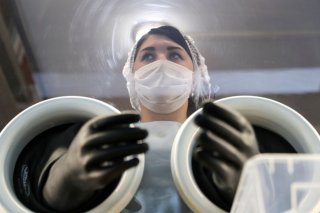 How long droplets with the novel coronavirus last on surfaces depends on the temperature and humidity level, according to a new study published in the journal Physics of Fluids.

The World Health Organization has said that “COVID-19 is spread through respiratory droplets when an infected person coughs, sneezes or speaks. People can also be infected by touching a contaminated surface and then their eyes, mouth or nose.”

As these microscopic droplets can sometimes settle on surfaces, a team of researchers tried to find out how long it took the droplets to dry out—and killing the contagion inside. The longer it takes to dry out, the higher the chance that someone else could get infected.

“The outdoor weather … determines the duration of drying of respiratory droplets deposited on surfaces,” the study’s co-author Rajneesh Bhardwaj, of the Indian Institute of Technology Bombay, told Reuters.

“The drying time is linked to the survival of the coronavirus inside the droplets. This may not be the sole factor but definitely the outdoor weather matters ... and our study provides some evidence for this fact.”

The team compared the average drying time of droplets in six different cities with wide-ranging temperatures and humidity levels. The scientists eventually concluded that environments with higher temperatures and lower humidity are able to dry out the droplets quicker.

For example, New York City had a daily rate of new infections that was 35 times higher than in Singapore. The drying time for droplets in NYC was about a minute, while it was nearly two minutes in the Southeast Asian city-state.

Although rare, a person can get infected by the coronavirus if they touch a surface or object that has the virus on it, and then touch their mouth, nose or eyes. The Centers for Disease Control and Prevention has said that it “does not spread easily” that way.

“Our study suggests that surfaces such as smartphone screens and wood need to be cleaned more often than glass and steel surfaces, because droplets form blob-like shapes on the former surfaces and the droplets evaporate slowly on such surfaces, thereby increasing the survival of the coronavirus,” Bhardwaj said.

A recent study, which was published in the New England Journal of Medicine, discovered that COVID-19 was detectable for up to 24 hours on cardboard and 72 hours on plastic and stainless steel.