The Great Coronavirus Mutation Has Begun 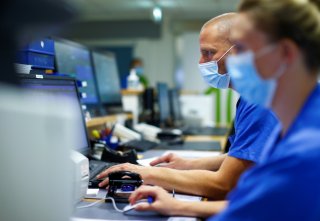 The novel coronavirus has mutated from its original strain and is now considered more infectious, according to researchers from Houston Methodist Hospital.

The study, which has not been peer-reviewed but published on the preprint server MedRxiv, did not discover that these mutations have made the virus deadlier.

All viruses accumulate genetic mutations, and most are insignificant, scientists say.

According to study author James Musser, of Houston Methodist Hospital, SARS-CoV-2 is relatively stable, but with transmission so widespread in the United States, the virus has had abundant opportunities to mutate—potentially with deadlier consequences.

“We have given this virus a lot of chances,” he told the Washington Post. “There is a huge population size out there right now.”

The scientists were aware that there were several different strains of the virus that was present in Houston from the start of the pandemic, but after the outbreak in the summer, they found that nearly every genetic sample they analyzed revealed a mutation.

That particular mutation—known as D614G—was shown to alter the structure of the spike protein that gives the novel coronavirus its crown-like appearance, which the researchers say is associated with “increased transmission and infectivity.”

The spikes are what enable the virus to bind to and eventually infect cells.

Individuals who carried these mutated strains were also shown to have higher viral loads in the back of their nose and throat, the study found, suggesting that the new strains are, in fact, more contagious.

David Morens, a virologist at the National Institute of Allergy and Infectious Diseases, noted that the data points to a strong possibility that the coronavirus has become more transmissible and that this “may have implications for our ability to control it.”

He added that the virus could potentially be responding—via random mutations—to public-health interventions like mask-wearing and social distancing.

“Wearing masks, washing our hands, all those things are barriers to transmissibility, or contagion, but as the virus becomes more contagious it statistically is better at getting around those barriers,” Morens told the Washington Post.

The study’s findings also have implications in the development of a viable coronavirus vaccine.

“Although we don’t know yet, it is well within the realm of possibility that this coronavirus, when our population-level immunity gets high enough, this coronavirus will find a way to get around our immunity,” he said.

“If that happened, we’d be in the same situation as with the flu. We’ll have to chase the virus and, as it mutates, we’ll have to tinker with our vaccine.”

Now more than eight months into the pandemic, there are roughly 32.3 million confirmed cases of coronavirus worldwide, including at least 984,000 related deaths, according to the latest data from Johns Hopkins University.