New Study Warns That the Coronavirus Could Become Seasonal Virus 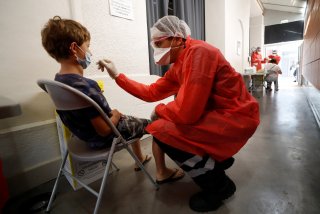 Each year, many countries around the world prepare for the seasonal patterns of respiratory viruses, with some people even taking the extra precaution to get an annual flu shot.

Given how billions of people are coexisting with these seasonal viruses, will the coronavirus, also known as COVID-19, follow a similar path and circulate across the seasons? According to a new study published in Frontiers in Public Health, that really is a strong possibility.

“COVID-19 is here to stay and it will continue to cause outbreaks year-round until herd immunity is achieved,” the study’s senior author Dr. Hassan Zaraket, of the American University of Beirut in Lebanon, said in a news release.

“Therefore, the public will need to learn to live with it and continue practicing the best prevention measures, including wearing of masks, physical distancing, hand hygiene, and avoidance of gatherings,” he said.

There is an ongoing debate within the general scientific community about why some respiratory viruses are seasonal, especially in temperate regions. For example, influenza and several types of coronaviruses that cause the common cold are known to peak in winter in temperate regions but circulate year-round in tropical areas.

Some of the driving factors could be a certain temperature and humidity levels, which can help viruses linger in the air and on surfaces for longer periods of time.

Moreover, “people’s susceptibility to infections and human behaviors, such as indoor crowding, differ across the seasons due to changes in temperature and humidity,” the study’s authors wrote.

“These factors influence (the) transmission of respiratory viruses at different times of the year.”

At this moment, however, the novel coronavirus is not like the other seasonal viruses, mostly due to its higher transmission rates—which is “at least partly due to circulation in a largely immunologically naive population.”

“This means that unlike the flu and other respiratory viruses, the factors governing seasonality of viruses cannot yet halt the spread of COVID-19 in the summer months. But, once herd immunity is attained through natural infections and vaccinations, the R0 should drop substantially, making the virus more susceptible to seasonal factors,” the researchers added.

R0 is a mathematical term that indicates how contagious an infectious disease is.

Such seasonality has been reported for other coronaviruses, such as NL63 and HKU1, which follow the same circulation pattern as influenza.

“This remains a novel virus and despite the fast-growing body of science about it, there are still things that are unknown,” Zaraket said.

“Whether our predictions hold true or not remains to be seen in the future,” he said. “But we think it’s highly likely, given what we know so far, COVID-19 will eventually become seasonal, like other coronaviruses.”