Know This: Face Masks May Prevent Second Wave of the Coronavirus 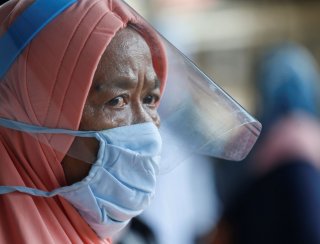 For months now, many Americans have been directed to wear face masks when out in public—all in an effort to curb the spread of the coronavirus.

Although there is still some confusion over how effective masks are, one recent study from the University of Cambridge and University of Greenwich says that if 100% of people wore masks all the time in public, in addition to lockdown measures, that should be enough to stave off a second wave of COVID-19.

“Our analyses support the immediate and universal adoption of face masks by the public,” Richard Stutt, who co-led the study at the University of Cambridge, said in a release.

“If widespread face mask use by the public is combined with physical distancing and some lockdown, it may offer an acceptable way of managing the pandemic and re-opening economic activity long before there is a working vaccine.”

The study, which was published in the journal Proceedings of the Royal Society A, hinted that even if only 50% of people wore masks in public, that could still be of huge benefit.

“We have little to lose from the widespread adoption of face masks, but the gains could be significant,” the study’s co-author Renata Retkute said in a release.

The World Health Organization has also jumped on board, as it said last week that it now recommends that everyone wear fabric face masks in public to try to stop the contagion’s spread.

Despite knowing about the potential protections that masks could offer, Americans are generally far from compliant.

According to a Gallup poll that was conducted in April, only 36% said that they always wore a mask while out in public. 32% replied sometimes and 31% said never.

Surveys have also shown that certain states are more compliant than others. For example, according to a YouGov poll of 89,347 American adults, 52% of people in New York said that they wore masks while outside the home. In Wisconsin, that percentage only sat at 31%.

“There is a common perception that wearing a face mask means you consider others a danger,” the study’s co-author John Colvin, a professor at the University of Greenwich, said in a release.

“In fact, by wearing a mask you are primarily protecting others from yourself. Cultural and even political issues may stop people wearing face masks, so the message needs to be clear: my mask protects you, your mask protects me.”