Study Finds Those Under 20 Half as Likely to Get Coronavirus 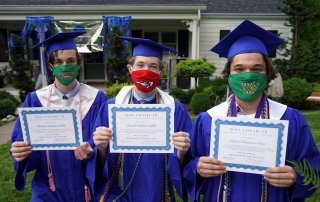 Children and teenagers are half as likely to contract the coronavirus than the rest of the population, according to a new study that was published in the journal Nature Medicine.

The modeling study, conducted by epidemiologists at the London School of Hygiene and Tropical Medicine, tapped into transmission models to estimate disease susceptibility and the relation of age to cases.

Researchers estimated that clinical symptoms of the novel coronavirus are apparent in 21% of individuals aged between 10 and 19. This estimate jumps to 69% in people aged 70 or over.

The transmission models were based on data from six countries—China, Italy, Japan, Singapore, Canada and South Korea.

After factoring in previous research on estimated infection rates and severity of symptoms, the team concluded that those under 20 only have half the risk of COVID-19 infection than the people over 20.

“If the number of infections or cases depends strongly on the role of children, countries with different age distributions could exhibit substantially different epidemic profiles and overall impact of COVID-19 epidemics,” the study said.

Data from the Centers for Disease Control and Prevention seems to back up the study’s findings, as the institute has said that while some children have become sick with the coronavirus, adults do make up most of the known cases to date.

Researchers also discovered wide variations in symptomatic cases related to age—only 21% under 20 were likely to show symptoms compared to 69 percent of those over 70.

In response to the pandemic, schools worldwide have been shut to prevent further spread of the contagion. According to UNESCO estimates, more than 1.5 billion students in 190 countries—or about 90% of the world’s learners—have not been able to attend school.

Now, as lockdowns have started to ease, governments and experts are trying to figure out the best possible ways to keep children safe in the classroom.

“Whether to reopen schools or not is a complicated question,” the study’s co-author Rosalind Eggo said in a statement. “We’ve provided some evidence showing an indication of decreased (COVID-19) susceptibility in children.”

The authors noted that their modeling could “have implications for the likely effectiveness of school closures” in tackling COVID-19, which “might be less effective than for other respiratory infections.”