Americans Fear North Korea: Then Why Is the United States Still Over There? 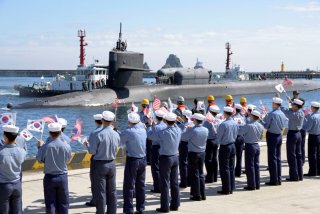 In a world full of woes, nearly half of Americans profess to be worried about North Korea’s nuclear program. More than half of Republicans and nearly as many Democrats. Only independents seemed reasonably comfortable with a nuclear-armed North.

And that was before the latest flurry of North Korean missile activity. Little more than a week ago the Democratic People’s Republic of Korea (DPRK) tested a cruise missile which it called “a strategic weapon of great significance.” Although the missile’s capabilities are not yet known, consultant and former federal official Vann H. Van Diepen observed that such as weapon “could augment the ballistic missile force in several useful ways, including by further complicating alliance air and missile defenses, permitting a substantial increase in overall ballistic-plus-cruise missile force size and further diversifying and increasing the flexibility of the missile force.”

Equally worrisome is the apparent restart of the North’s Yongbyon nuclear reactor. The International Atomic Energy Agency declared this action to be “deeply troubling. The continuation of the DPRK’s nuclear programme is a clear violation of relevant UN Security Council resolutions and is deeply regrettable.” The goal almost certainly is to produce more plutonium to enhance Pyongyang’s nuclear arsenal.

The Diplomat’s Ankit Panda explained: “North Korea will likely continue to focus on the quantitative expansion of its nuclear force and qualitative refinements to its nuclear weapons and delivery systems. The resumption of operations at the Yongbyon reactor is but a part of this broader endeavor, albeit a significant one.” This reactor was one of the installations that Kim Jong-un apparently was willing to trade for sanctions relief, though that proposal foundered at his 2019 Hanoi summit with President Donald Trump.

The best that can be said for Pyongyang today is that larger proportions of Americans worry about China and domestic extremism. Roughly comparable numbers worry about Iran and Russia, but the partisan cleavages in these cases are more pronounced.

Contra fears that the Biden administration would be satisfied with a replay of the Obama administration’s policy of “strategic patience,” which resulted in little direct contact with North Korea, Biden officials have pressed the North to engage. However, the DPRK so far has responded dismissively. And its recent course has been almost entirely negative, isolating itself to limit the danger from the coronavirus. However, Pyongyang has gone much further, repudiating past economic reforms and seeking to seal itself off from Western and especially South Korean culture.

At least in the short-term, the Kim regime appears to have concluded that negotiations are unlikely to yield a positive outcome, one that Kim Jong-un could accept. He might have decided to expand his program to increase his leverage for future negotiations or even to expand his nuclear arsenal sufficiently to go it alone. The Rand Corporation and Asan Institute warned that “North Korea could have 200 nuclear weapons and several dozen intercontinental ballistic missiles (ICBMs) and hundreds of theater missiles for delivering the nuclear weapons. The ROK (Republic of Korea) and the United States are not prepared, and do not plan to be prepared, to deal with the coercive and warfighting leverage that these weapons would give North Korea.”

This is a fearsome prospect, but only if the United States remains involved in South Korea. There already are seven other nuclear powers, none of which is likely to attack America. India, France, Israel, and the United Kingdom fall into the category of allies or partners and are very unlikely nuclear threats. Three others are adversaries or frenemies: China, Russia, and Pakistan. No self-respecting country would want to meet these three governments in a dark alley. Two are dictatorships while the third is essentially a military regime with a democratic façade, atop a popular Islamist volcano. All three have more than a few complaints about U.S. behavior. Even so, however, none is remotely close to launching a war against America, let alone a nuclear war.

In principle, North Korea is little different. A terrible totalitarian despotism, the DPRK nevertheless has consistently behaved rationally. Contra the “Team America” stereotype of the Kim dynasty, the North’s leaders have played a weak hand well, maintaining their nation’s independence from both Moscow and Beijing while fending off South Korea backed by the American military colossus, all along dominating international headlines.

However, the balancing act looks ever tougher as the DPRK risks falling back into famine and the regime desperately seeks to exclude outside influences which expose decades of lies to the North Korean people. Nevertheless, the United States would not be involved absent its continuing military presence, nearly seventy years after the conclusion of the Korean War.

Just as Pyongyang never threatened to turn Moscow or Beijing into a lake of fire, the Kims would not have issued videos showing American cities aflame if the United States wasn’t “over there,” threatening the DPRK with war. That was necessary in the aftermath of the terrible conflict which ravaged the peninsula and left the Republic of Korea at the mercy of North Korea backed by the Soviet Union and the People's Republic of China.

However, that world long ago disappeared. Neither Russia nor China would support renewed North Korean aggression against the ROK. And the South has surpassed Pyongyang on virtually every measure of national power. The former even possesses qualitatively superior armed forces, with better equipment and training. Seoul lags in quantity only as a matter of choice, preferring to rely on U.S. defense subsidies instead of enhancing its own military strength.

Given America’s ever-growing financial burdens, it no longer can afford to underwrite populous, prosperous allies around the world. The economic necessity for gradual disengagement will be reinforced by the North’s steady expansion of its nuclear arsenal. The ability of Pyongyang to strike the American homeland makes a continuing security guarantee for the ROK far more dangerous than any benefit from easing Seoul’s defense burden.

Instead of relying on the United States, the South should prepare to take over its own security. That might include the necessity of developing its own nuclear deterrent. However distasteful that option, it would be far better than accepting the irresponsible Sen. Lindsey Graham’s argument for preventive war, killing potentially hundreds of thousands or even millions of people “over there,” as well as a large number of Americans.

Many Americans say they are afraid of North Korea. Actually, they should be afraid of Washington’s promise to protect the ROK from a nuclear-armed North. Drop the latter and Americans’ fears of Pyongyang would largely dissipate. U.S. policymakers should put the American homeland first in developing policy toward the Korean peninsula.