North Korea Truly Is the Hermit Kingdom (Thanks to Coronavirus) 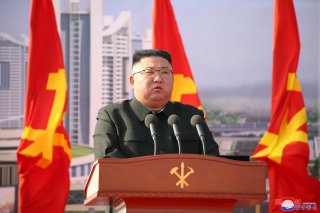 Despite having launched a terrible war and turned an entire nation into a totalitarian prison, during the 1960s the Democratic People’s Republic of Korea made a major push for international recognition. At the time the DPRK appeared to some as the more successful of the Koreas. Moreover, the world seemed filled with ideological friends, especially from the growing number of emerging nations experimenting with economic collectivism and political authoritarianism.

Since then, however, the disastrous failure of socialist and communist regimes in their many iterations shrunk Pyongyang’s friendship network. The North’s economic hardship, terrorist attacks, and criminal activities reduced its attractiveness as a partner to other governments. And now North Korea has spent more than a year isolating itself from the world in response to the global coronavirus pandemic.

Even the residents of states that are friendly to the North are unwelcome in the country as commerce has dwindled, humanitarian operations have closed, diplomats have gone home, and living standards have collapsed. Observed Daminov Ildar of Visionary Analytics: “North Korea seems to be rolling down the path of new unprecedented levels of isolationism.”

The economic implications of auto-quarantine were ominous from the start. In effect Pyongyang sanctioned itself, cutting legal trade and illicit smuggling alike. At the same time, the North’s decrepit agricultural system could not provide for its people. Supreme Leader Kim Jong-un recently warned of another “arduous march,” the term used by the DPRK during the killer famine of the late 1990s.

The Kim regime appears to be preparing for bad times by circling the ideological wagons. Even in the relatively better economic times of late, it was evident that the North was losing the information war. Most North Koreans were viewing or hearing South Korean culture, and they liked what they saw. Public paeans regarding the faux glory of the Kim dynasty proved to be no competition for the latest foreign entertainment seeping into the DPRK through its increasingly permeable border with China.

The North’s ongoing crackdown no doubt will cause North Koreans to be more careful about exploring the world beyond. However, even the threat of prison and execution has not succeeded in stifling popular curiosity. Thus, in a world that grows ever more ideologically hostile Kim might be tempted to permanently abandon his commitment to economic growth, which has expanded opportunities for the introduction of foreign ideas and return to his father’s and grandfather’s more autarchic approach.

As countries avidly joined the global economy, they understandably grew less interested in ties with the North. Even more important, Pyongyang’s less savory activities cost them friends. A number of third world states “decided not to open consulates or embassies . . . because what the North Korean embassies were doing around the world during this time,” according to Benjamin Young, an assistant professor at the Virginia Commonwealth University. “North Korea was really gaining a reputation around the world as a really reckless and terroristic actor,” Young added.

Most dramatic was the DPRK’s 1983 bomb attack on South Korean president Chun Doo-hwan’s entourage as he visited Burma, which wrecked Pyongyang’s relations with that nonaligned nation. It took a quarter-century for the two pariah regimes to get back together. Although the Burmese Tatmadaw, or military, remains in charge despite strong public opposition to its latest coup, its long-term future is unclear, and thus so is the strength of the Burma-North Korea relationship.

A more recent example of self-destructive DPRK behavior involves Malaysia, with which North Korea had good relations and even visa-free travel. “Malaysia has been unusually loyal to North Korea over the years,” according to Christopher Green, a Korea specialist at Leiden University in the Netherlands. However, the 2017 murder of Kim’s half-brother, Kim Jong-nam—made worse by the use of a dangerous nerve agent at the Kuala Lumpur Airport—led Malaysia to expel the North’s ambassador and withdraw its own diplomats. Malaysia’s extradition to the United States of a DPRK agent charged with money laundering led to a formal rupture in relations earlier this year.

Pyongyang can’t even count on communist governments today. There aren’t many: China, Vietnam, Cuba, and Laos are all that’s left even nominally. The latter, small, isolated, and poor, doesn’t offer much as a friend.

China and Vietnam obviously matter more, but they no longer are real communists. The People’s Republic of China (PRC) is a fascist or Leninist state. With business owners joining the Chinese Communist Party, Marx has been essentially interred in Mao Zedong’s Mausoleum and exists only in the memories of a small, hardcore left. Although Vietnam doesn’t quite so ostentatiously worship at the commercial cathedrals of capitalism, it doesn’t have much to do with revolutionary communism either, having turned to the United States for both trade and security.

The North’s strongest bond probably is with Cuba, which sits atop the former’s dwindling list of friends. Havana publicly speaks of its revolutionary roots, but also falls on the faux communist side, with a substantial private economy limited as much by U.S. sanctions as domestic regulations.

Worse, Cuba is another desultory example of how communism consistently imposes poverty on even the most energetic and productive peoples. So Havana now desperately seeks foreign investment as its young flee the country seeking economic opportunity. And, much worse from the North’s standpoint, Havana has demonstrated how even a little civic space is dangerous, as the Cuban people recently demonstrated across the island, criticizing their rulers, demanding liberty, and waving American flags.

No doubt, the country’s location, barely one hundred miles from the United States, and many family connections, with a large Cuban-American community in Florida, play a role in this veritable ideological apostasy. However, Young also pointed to Havana’s economic policies:

“The ongoing protests in Havana, among other developments in recent years, could not more clearly demonstrate just how different Cuban socialism and North Korean socialism have become,” Young said. “While Cubans protest on the streets and demand change from their leadership, North Korean children ‘volunteer’ to work in coal mines and farm fields. The liberalization of the Cuban economy and political system has allowed Cubans to more freely express their sentiments and beliefs and has created space for a real civil society.”

Indeed, this is the inevitable tradeoff that every authoritarian regime ultimately faces. The openness necessary for economic development also promotes social and political liberation. Freedom is not automatic, as is evident with the PRC, which is using technology to tighten its control over its people. Xi Jinping apparently imagines a 1984-style world in which all information inputs can be controlled. Yet experience suggests that this effort will ultimately fail.

In the case of North Korea, the regime even fears the influence of its less oppressive northern neighbor. Pyongyang is likely to end up with fewer friends than before the pandemic. Yet its increasingly desperate attempts to halt South Korea’s influence cannot reverse the alternate reality that most North Koreans already have glimpsed. Over the years more than a few observers have wrongly predicted the Kim dynasty’s imminent demise. These days, however, Kim is acting as if he fears precisely that result.