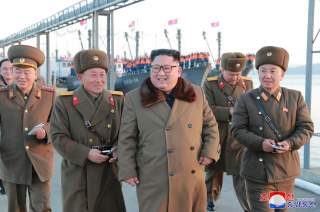 In 2018, the Korean Peninsula entered a fragile détente. The risk of conflict was reduced throughout the year thanks to extensive inter-Korean contacts and more limited U.S.-North Korea diplomacy. Heading into 2019, we are likely to see this détente persist, but its fragility may make itself more apparent.

The new year is likely to herald a new period of “spring summitry.” North Korean leader Kim Jong Un will likely travel to Seoul for the fourth summit between him and South Korean President Moon Jae-in. In Pyongyang, meanwhile, Kim is expected to receive Chinese President Xi Jinping and possibly Russian President Vladimir Putin. Separately, Kim will meet again with U.S. President Donald J. Trump, defibrillating the U.S.-North Korea diplomatic process, which has largely been moribund since August, even with an October trip to Pyongyang by U.S. Secretary of State Mike Pompeo.

We shouldn’t expect a second U.S.-North Korea leader’s summit to change the fundamentals that have persisted through 2018. North Korea will continue to quantitatively expand its nuclear forces and the United States will continue to insist on an all-or-nothing approach, seeking to trade Pyongyang’s “final, fully verified denuclearization” for sanctions relief. What a summit is likely to do is reset the clock on lower-level U.S.-North Korea contacts, which can be expected to be as unproductive in 2019 as they were in 2018.

Importantly, we should look for signs that a serious working-level process might become a reality between the United States and North Korea. Steve Biegun, the Trump administration’s special representative for North Korea,  has met North Koreans on just one occasion since being appointed in August 2018: when he traveled with Pompeo to Pyongyang. Until Biegun gets in a room with his North Korean counterpart, denuclearization diplomacy will remain what it has in 2018: entirely cosmetic and driven by Kim’s whims.

The most serious risk entering the new year is that the fragility underlying the détente of 2018 gives way. North Korea recognizes that its moratorium on missile and nuclear testing has given Trump the space he needs to walk away from the brink. At the same time, if Pyongyang’s push for sanctions relief—or at least exemptions—yields no results, North Korea may signal a return to its old ways.

The collapse of the Obama administration’s Leap Day Deal in 2012 with a North Korean space launch is instructive here. The one saving grace may be that Kim currently enjoys the appearance of a leader seeking to negotiate in good faith; that evaporates the minute North Korea returns to testing.

For progress in 2019, the Trump administration must break away from the same all-or-nothing approach to denuclearization that it has adopted since its policy review on North Korea was completed in early 2017. Progress will require flexibility and progress is necessary as Kim covertly continues to expand his nuclear forces behind a façade of détente diplomacy. In seeking all-or-nothing, the administration is likely to find itself ending up with an abundance of the latter.

Ankit Panda is a senior editor at The Diplomat, where he writes daily on security, geopolitics, and economics in the Asia-Pacific region and hosts a popular podcast. His work has appeared in a range of publications across the world, including the New York Times, the Diplomat, the Atlantic, the Washington Quarterly, Al Jazeera, Politico Magazine, and War on the Rocks.