Are America and South Korea Ready for Kim’s Next Nuclear Weapons Test? 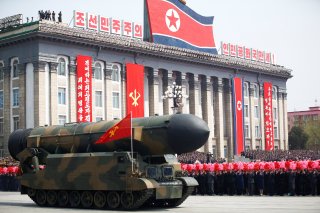 U.S. president Joe Biden and newly elected South Korean president Yoon Suk-youl are scheduled to meet in Seoul on May 21, at a time when North Korea appears to be preparing to test a nuclear weapon for the first time in five years.

The prospects for diplomatic progress are at a nadir. Yoon ran for president on a hawkish foreign policy, calling for South Korea (ROK) to have the capability to launch a preemptive strike on the North. In April, before Yoon had taken office, then-Defense Minister Suh Wook also stated that the ROK had preemptive strike capabilities. Kim Jong-un’s sister, Kim Yo-jong, called him a “scum-like guy” and threatened the use of nuclear weapons in such a case.

Now, U.S. intelligence suggests that the DPRK could resume nuclear testing at Punggye-ri, the site of six previous tests before it was disabled in 2018, as early as this month (although it will more likely take multiple months to prepare the site). Satellite photos show North Korea restoring damaged facilities, including rebuilding a bridge and excavating tunnels.

Already in early 2022, North Korea has tested missiles at a faster rate, including ballistic missiles with hypersonic entry vehicles. Even if some of those missiles didn’t work, they did stoke fears in the South. Support for the development of a nuclear weapons program is increasing among the South Korean public. Recently, the Choson Ilbo published an editorial stating that there is “no choice” but for the ROK to acquire its own nuclear deterrent.

Kim Jong-un has rejected U.S. overtures and taken to criticizing American policy as “hostile.” For North Korea, U.S.-ROK joint military exercises and the presence of U.S. troops in the Republic of Korea is itself a “hostile policy.”

Given all this, what will Biden and Yoon talk about in Seoul, and what kind of policy will they pursue where others have failed?

But how realistic is that goal? North Korea has been clear that they view nuclear weapons as an essential deterrent against the possibility of regime change. Sico van der Meer of the Clingendael Institute wrote in 2018, “On the foreign policy level, the main goal is deterrence. The regime in Pyongyang is sincerely fearing regime change efforts from outside—actually, not only from South Korea and the U.S., but from other regional actors like China and Russia as well.”

“We're under no illusions how difficult this [denuclearization] is—none whatsoever. The past four administrations have not achieved the objective,” Biden said in 2021.

Before Biden stepped into the Oval Office, Victor Cha outlined six options for U.S. policy towards North Korea. Many of them had already been tried extensively with little to no success. But among the options were two intriguing possibilities that have not been tried: pursuing a new diplomatic relationship and recognition with North Korea, and pursuing a Cold War-style arms control regime.

“This is an engagement-oriented approach for which there is no precedent in North Korea negotiations but for which past examples can be found in arms control talks during the Cold War. This model focuses on capping and containing the most dangerous elements of weapons program. This negotiation would focus on achieving agreements that stop the growth of the North Korean nuclear threat and minimize the chances of inadvertent nuclear war, nuclear proliferation, and nuclear leakage. This approach would look fundamentally different from previous negotiations,” Cha wrote.

Implied in any attempt to reach an arms control agreement is the idea that North Korea will maintain its nuclear weapons for the foreseeable future. That position could be interpreted as the United States “accepting” the rogue state as a nuclear state.

“This approach would be favored by those who think that the United States should accept the reality of a nuclear North Korea and should focus instead on practical and useful goals to reduce the threat rather than let the program continue to grow unimpeded,” Cha wrote. “On the other hand, it would be politically controversial because it would appear as though the United States has resigned itself to accepting North Korea as a nuclear weapons state.”

Still, is there any scenario in which North Korea does not maintain its nuclear weapons? Would entering doomed denuclearization talks or stubbornly applying even more sanctions cause Kim to reverse course?

Some analysts published in the Washington Post and the National Interest have been calling for the United States to recognize North Korea as a nuclear power. Mayumi Fukushima, a postdoctoral research fellow with the Project on Managing the Atom and the International Security Program, recently pointed to the invasion of Ukraine as another factor hardening North Korea against denuclearization.

“The United States needs to set a more realistic policy rather than insisting on North Korea’s complete, verifiable, and irreversible denuclearization, which virtually every expert thinks is an unattainable goal. To many observers, the war in Ukraine and the West’s responses so far have weakened the international nuclear nonproliferation regime. This war has unfortunately raised the perceived deterrent value of nuclear weapons,” she wrote.

Others recognizing the impracticality of the current approach have proposed different alternatives. Mitch Shin, a non-resident research fellow at the Institute for Security & Development Policy (ISDP) of the Stockholm Korea Center, wrote in February that Biden “should immediately recalibrate his ‘calibrated and practical’ policy on North Korea.” Instead of continuing to demand complete and verifiable denuclearization taking place all at once, the U.S. should negotiate for phased denuclearization.

Furthermore, he proposed that the United States help South Korea enhance its own defense capabilities and even be accepting of ROK preemptive strikes in particular circumstances. While not recognizing North Korea as a nuclear state, this proposal, too, differs from the existing status quo.

Will the United States and South Korea be able to alter a policy that is somewhat immovable at a time when both countries’ presidents are facing dismal approval ratings and the world is consumed by the war in Ukraine? It won’t be easy, but it must be tried.