Biden Wants a Pragmatic Approach Towards North Korea. Why Not Leave Korea Altogether? 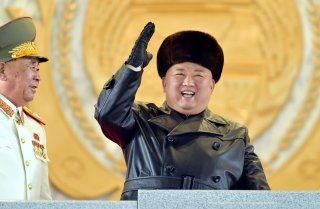 The Biden administration finished its review of policy toward North Korea. The result appears to be surprisingly sensible.

An unnamed senior official told The Washington Post: “We are not seeking a grand bargain or an all-or-nothing approach,” which scuppered President Donald Trump’s effort at personal diplomacy. “What we’ve settled on is what we think is a calibrated, practical approach to diplomacy with the North with the goal of eliminating the threat to the United States.”

It is only fair to wish the administration well in its efforts. However, Biden officials are more likely to succeed if they correctly diagnose the problem. And while it is common to speak of North Korea’s “threat” to America, what precisely is the danger?

Although North Korean leaders have been commonly tagged as crazy, ready to launch a suicidal attack on America, only Kim Jong-un’s late father, Kim Jong-il, looked the part with oversize glasses, bouffant hair, and platform shoes. In fact, all three ruling Kims behaved rationally, playing a weak hand well, turning a small, impoverished, and isolated nation into a global cause celebre.

Founder Kim Il-sung launched a war, but only when it looked like he could win, which was after gaining Soviet and Chinese support. Kim Jong-il staged notable military provocations in 2010 but showed a deft touch in halting before he triggered a South Korean military response. Kim Jong-un was liberal with military threats while developing the North’s nuclear and missile capabilities, but avoided triggering a conflict that he could not win. The Democratic People’s Republic of Korea (DPRK) appears to be a classic case demonstration of the effectiveness of deterrence.

So assume the DPRK’s leadership is rational, though evil. Then what?

Kim Jong-un doesn’t plan on shooting nuclear-tipped missiles at America. He didn’t plan on doing so even before his brief “love affair” with Trump. He won’t do so in the future even if Santa brings all of the weapons on Kim’s long wish lists of recent months. Kim has given no indication that he wants to leave this earth amid a radioactive funeral pyre in Pyongyang.

Like his forebears, he spouted plenty of verbal threats against the U.S. But not because he hoped to conquer North America. After all, he never showed much interest in threatening other countries. Neither he nor his predecessors ever promised to turn major cities into “seas of fire” in China, Russia, India, Europe, Africa, South America, Canada, Cuba, Australia, Central Asia, Micronesia, or most anywhere else. People in those nations don’t spend their lives cowering in bomb shelters, fearing the arrival of the triumphant Korean People’s Army after a nuclear bombardment.

Which suggests that the easiest way to address “the threat to the United States” is to stop threatening Pyongyang.

To be sure, the DPRK is an awful regime with a terrible record, both in terms of what it does to its own people and threatens to do to those living in the Republic of Korea (ROK). That had major geopolitical implications during the Cold War and triggered U.S. intervention. Those unique circumstances have disappeared, however.

Today the Koreas merely involve one country threatening another. That’s bad news, of course, but doesn’t have to involve America. Imagine India and Pakistan shooting up each other for a fourth (or fifth, depending on what counts) time. The result would be a geopolitical disaster, destabilizing the region and creating a humanitarian crisis. However, it would not threaten to alter the global balance of power between two contending superpowers, like the Korean War in 1950. No one in Washington—at least, no sane denizen of Washington—would urge the United States to intervene militarily, create a security alliance, and/or establish a troop tripwire, as in Korea.

So if the administration wants to defuse the North Korean “threat,” a reasonable desire, why not simply drop the security guarantee and bring home the troops? What the United States did in 1948 when the ROK was established, 1950 when the North Koreans invaded, and in 1953 when the “mutual” defense treaty was inked don’t matter. Those worlds have been swept away, lost to the mists of history.

Today South Korea vastly outranges the North, with more than fifty times the GDP and twice the population. The ROK enjoys a vast technological edge and enjoys broad international support. North Korea’s wartime allies, Beijing and Moscow, would not again back an invasion. Although Seoul’s armed forces are smaller, they are technologically superior and could be expanded essentially at will. There is no artifact of geography or event in history which prevents the country to the south from having as many soldiers, tanks, or artillery pieces as the country to the north.

Of course, it is said, this would be a terrible time to remove America’s deterrent presence but it’s no more terrible than any time over the last sixty-eight years. The lion could be preparing to bed down with the lamb and fans of the alliance would still say that it was an awful moment to risk the peace. If the United States faces an unnecessary threat, then the only sensible response is to eliminate it, not offer excuses for treating it as the new normal.

There are a few remaining, unconvincing “Korea really isn’t about Korea” arguments. For instance, it is cheaper to keep U.S. forces in the ROK since Seoul helps pay the bill. However, the true cost of the commitment is of the added force structure necessary to back an additional promise to go to war, not of deployment. Another argument notes that any withdrawal anywhere undermines U.S. credibility everywhere, encouraging adversaries to act. This claim is oft made but never seems to be true. It presumes that no policy can ever be changed under any circumstances, an inane position. Actions should reflect interests, and every great power, including U.S. rivals, adjusts its policies when conditions change. This constant process of reevaluating interests and reshuffling resources has not triggered unending global cataclysms.

For instance, in 1975 Washington suffered a humiliating exit from Vietnam—remember the embassy roof evacuation via helicopter!—and . . . nothing happened. The Soviet Union did not conquer Europe or the Middle East. The People’s Republic of China (PRC) did not seize Taiwan or Japan. North Korea did not attack South Korea. The Third World did not turn communist. There was no Red Dawn in America.

To the contrary, seventeen years later the Soviet Union was gone. The Eastern European communist regimes were history. The Warsaw Pact had disappeared. Market reforms were advancing throughout the Third World. The PRC replaced Karl Marx with Milton Friedman as its economic guru. And the United States and a united Socialist Republic of Vietnam were moving toward establishing diplomatic relations. This has led alliance advocates to use the “kitchen sink” argument. America’s Korea presence promotes regional stability. (Otherwise, Vietnam or Cambodia might go to war with Malaysia or Indonesia, or some other equally fantastic claim?) Without the United States there would be a regional arms race. (If America’s friends are worried about security, then shouldn’t they defend themselves?) Bases in South Korea would be a great help to contain China. (Who imagines that Seoul would be foolish—really suicidal—enough to make the PRC a permanent enemy by helping America in a war over, say, Taiwan?)

America’s presence on the Korean Peninsula has the feel of yet another “whatever has been must always be” commitment. Inertia is powerful, especially when the armed forces are devoted to justifying force structure and budgets. Why not imagine a world in which the United States does not subsidize the defense of prosperous, populous allies, such as the ROK? This would be great for Americans, though not so much for the Pentagon.

The DPRK threatens America only to the degree that the United States is evidently prepared to intervene in another round of the ongoing Korean civil war. The potential price might have seemed modest enough in the past, despite the catastrophic conventional cost of the Korean War. However, the North’s development of nuclear weapons dramatically changes the geopolitical calculus. Pyongyang’s looming ability to hit America’s homeland as well as Pacific possessions with nuclear weapons makes it imperative for the United States to exit the potential Korean imbroglio. Nothing at stake on the Korean Peninsula is worth risking American cities and millions of lives.

The Biden administration is right to seek engagement with the North, especially to at least limit the DPRK’s nuclear ambitions. However, America’s involvement is primarily a matter of choice. Better for Washington to begin the process of exiting militarily and turning responsibility for dealing with the North over to the ROK. The highest obligation of this administration and its successors is to the American people. That requires ending the North Korean nuclear threat—by finally turning South Korea’s defense over to Seoul.