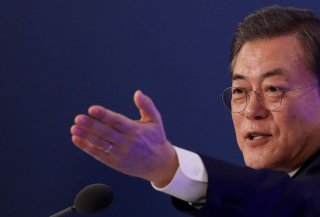 In dealing with Pyongyang the Republic of Korea’s behavior could be characterized as repeatedly turning the nation’s cheek. No government on earth has a dictionary so well-stocked with insults as North Korea. Its propensity to cover its adversaries in vulgarities, slurs and calumnies triggered the famous 2017 pre-“love affair” exchange between Kim Jong-un and former President Donald Trump. During this exchange, Kim famously labeled Trump a “mentally deranged dotard.”

These days North Korea’s insulter-in-chief is Kim’s sister, Kim Yo-jong. Although her internal position has fluctuated, she remains a sure bet when it comes to trashing the ROK. In January she declared that South Koreans “are the idiot and top the world’s list in misbehavior as they are only keen on things provoking world laughter” and were “shaking in their shoes” after watching the North’s latest military parade.

Her comments were even harsher last year. She called defectors “betrayers and human scum” and led Pyongyang’s attack on South Koreans who sent information and goods via balloons into the Democratic People’s Republic of North Korea: “I feel it is high time to surely break with the South Korean authorities.” Her threats triggered a scandalous rush by ROK officials and legislators to appease the Kim regime by barring private efforts in order to provide outside information.

Kim Yo-jong also presaged last year’s destruction of the Koreas’ liaison office in the border city of Kaesong that had been constructed at South Korean expense—of course—when she announced that “Before long, a tragic scene of the useless north-south joint liaison office completely collapsed would be seen.” Days later the DPRK dramatically blew up the building.

The Moon government was humiliated. It convinced no one when it warned that it would “respond strongly” if the Kim regime “continues to worsen the situation.” Seoul insisted that “The government makes it clear that all responsibility of this situation lies in the North,” which the latter never denied. And one could almost hear the whiny tone when Moon Jae-in’s government complained that the incident “abandons the hopes of everyone who wanted the development of inter-Korean relations and peace settlement in the Korean Peninsula.”

Of course, the North’s behavior was outrageous. As it had been for the past, oh, seventy-three years of North Korea’s existence—except the brief moments when summitmania captured the DPRK and its surprisingly peripatetic Supreme Leader. However, the failed Hanoi Trump-Kim meet-up dramatically ended that phase, after which the North returned to its often uncommunicative and always surly self.

Of course, it is better for insults than bullets to fly, but the North has resumed testing short-range missiles capable of hitting targets in the ROK. Seoul’s seeming endlessly forgiving, even appeasing, behavior risks encouraging the Kim regime to believe its own rhetoric about South Korean weakness.

In 2010 the DPRK engaged in a deadly game of international chicken, sinking an ROK navy corvette, the Cheonan, and then bombarding the South’s Yeonpyeongdo Island, actions attributed to Kim Jong-un acting under the authority of his father, Kim Jong-il. At that point Seoul went on almost hair-trigger alert, ready to respond militarily to additional provocations. Kim’s father apparently recognized the danger, pushing no further.

It would be dangerous if Kim Jong-un, now in charge, believed that he was pushing on an open door and sought to add a little heat to what seems to be a slow return to the traditional inter-Korean cold war. However, South Korea’s Foreign Minister Chung Eui-yong may have provided the necessary antidote.

Last week he admitted that he had “a lot of regrets about the state of strained inter-Korean relations.” However, he placed the blame squarely where it belonged, on Pyongyang. He cited the destruction of the liaison office, which was supposed to host weekly meetings between the two Koreas. The ROK spent $8.4 million to renovate the building and supporting facilities, located in the Kaesong Industrial Complex, which was closed in 2016.

Chung insisted that “North Korea must not only apologize for this, but also promise to make sure something like this would never happen again.” The likelihood of Kim ever saying he is sorry and sending a check to the South seems small at best—one is tempted to tie it to an unlikely meteorological event, such as hell freezing over. However, last year the DPRK’s Supreme Leader did express his regrets over the still somewhat mystifying events that ended in the shooting of a South Korean official who breached the two countries’ maritime border. Pyongyang proved to be surprisingly pragmatic, retreating when necessary to achieve its ends.

Seoul should require responsible behavior by the North if the latter hopes for benefits from the South. Both sides obviously gain from peace. However, Pyongyang always wants more given its desultory economic state. The ROK should indicate that it will no longer submit to North Korea’s extortionate demands and calculated insults, and then stick to its word.

Indeed, Chung underscored that the DPRK is the vulnerable party. He opined: “if you look closely, I think they also reflect [the North’s] desperation . . . We should keep in mind: If they really think they are strong, would they use these expressions?”

In contrast, the ROK should demonstrate strength to North Korea. The South faces obvious social, economic, and political challenges. Nevertheless, compare the country of today with that of 1948. Modern South Korea is unrecognizable. It has made a resilient democracy, sustained an innovative economy, and joined the most successful nations worldwide. Seoul should act the part when dealing with Pyongyang, which should mean no more craven surrenders to North Korean insults.

With President Moon Jae-in planning a visit to Washington next month, now would be a good moment for the ROK to take a tougher stand. Moon had little rapport with President Donald Trump, who recently emerged from humiliating political exile in Florida to insult him. However, South Korea’s president may find President Joe Biden easier to deal with: both are men of substance and capable of thinking beyond the next tweet.

With Biden, too, the ROK government should establish its seriousness. Although the United States has routinely dominated policy toward the North, Seoul should insist on taking a bigger role. After all, the relationship with Pyongyang obviously matters much more to South Korea and its 51.3 million people than to Washington. Predictions from the Rand Corporation and Asan Institute that the North could amass a nuclear arsenal of two hundred or more weapons this decade add obvious urgency to the issue.

Moon’s almost desperate desire for détente with the North is understandable. However, as his foreign minister appeared to understand, any real peace will require that the DPRK respect South Korea. Seoul should continue to put peace at the top of its priority list, and the best way to do that is to stop submissively accepting North Korean misbehavior. As Chung noted, the latter indicates despair, not confidence. The ROK has achieved much. It should exude strength in dealing with Pyongyang and other nations, including America.