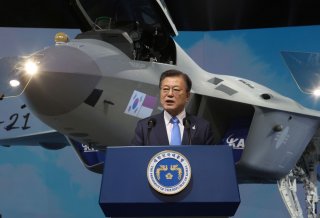 ‘’South Korean President Moon Jae-in is set to visit Washington next month, though the date is not yet settled. Alas, Seoul trails Japan, whose prime minister came in mid-April. Although again being in second place no doubt reinforced the Republic of Korea’s sense of inferiority tinged by paranoia, at least the time gap will not great.

More significant are the substantive differences between the two meetings. The differences between Seoul and Washington might be greater than at any time since another progressive, Kim Dae-jung, entered the Blue House during George W. Bush’s presidency—marked by the latter’s denunciation of the “axis of evil,” including the Democratic People’s Republic of Korea. Kim and Bush agreed on little other than that they knew as allies they were supposed to agree with each other.

Moon and President Joe Biden will have much to discuss. The easiest will be a potpourri of subjects reaching well beyond the Korean Peninsula. One is climate change, which did not register with the Trump administration. Seoul’s role is secondary to that of the United States and China, but Biden is attempting to make up for lost time.

The coronavirus also is likely to come up. The ROK sent personal protective equipment to America early during the pandemic. Although the Moon government initially handled the crisis well—winning the ruling party an unexpected majority in last year’s National Assembly elections—Seoul desperately needs more vaccines and is looking to Washington. Explained Foreign Minister Chung Eui-yong: “We are hoping that the United States will help us out with the challenges we are facing with the vaccines, based on the solidarity we demonstrated last year.”

In turn, Washington is likely to look to South Korea for help in reducing the semiconductor chip shortage. The ROK ranks alongside Taiwan as a global leader and Samsung reduced chip investment early in the pandemic. U.S. automakers have been hamstrung by the lack of chips as car orders have jumped.

Alliance issues were eased by the early completion of negotiations over host nation support, or the Special Measures Agreement, as it is known. The Trump administration initially demanded a five-fold increase in annual payments and the two governments deadlocked. The question of operational command, or OPCON, remains important, with the transfer planned for next year—but it has been delayed multiple times so far.

Moon decided not to wait to give advice to Washington, telling the New York Times that engagement was a “matter of survival.” And with the Rand Corporation and Asan Institute warning that the North could have two hundred nuclear weapons before the end of the decade, his position is understandable.

Rumors coming out of the Biden administration suggest that it realizes one-shot denuclearization is unlikely. Instead, the president’s aides reportedly are planning to push more limited agreements. This would be a welcome step long advocated by many analysts. Moon is likely to support this approach.

However, sanctions relief might come between the two governments. The ROK long has complained that U.S. and UN sanctions prevent Seoul from forging a better relationship with the DPRK. And the inability of the Moon government to give effect to its proposals for joint action soured Pyongyang on dealing with the South. Instead, North Korea came to treat its southern neighbor with special contempt, going so far last year to dramatically destroy the liaison offices constructed by the Moon government only a couple years before.

Biden is expected to take a tougher stance toward the North. The Sejong Institute’s Cheong Seong-chang predicted: “President Biden will likely emphasize that stronger international sanctions against North Korea are needed first to bring Pyongyang back to the dialogue table.” However, that strategy likely is doomed. The DPRK survived last year when it effectively sanctioned itself. And with U.S.-China relations at a post-Mao nadir, Beijing seems likely to keep the North afloat with food and energy shipments, if necessary.

Ironically, the People’s Republic of China is likely to be the other major issue of contention at the Moon-Biden summit. Biden and Moon might talk about how to convince the PRC to put more pressure on the North, but the idea remains a pipedream. China wants neither a failed state nor a reunited Korea aligned with Washington on its border. And with the United States attempting to build an anti-Beijing coalition both regionally and globally, the Xi government will provide the Biden administration with no favors.

More important, Biden is likely to press Moon to come out as a China critic. Japanese prime minister Yoshihide Suga won points in Washington by participating in what amounted to an anti-PRC talk fest, though public expressions were diplomatic. At the final press conference Biden declared: “We committed to working together to take on the challenges from China and on issues like the East China Sea, the South China Sea, as well as North Korea, to ensure a future of a free and open Indo-Pacific.”

After giving Washington good sound bites, however, Suga made clear that his government viewed “working together” primarily as cheering on the United States if it went to war with the PRC, at least when it came to Taiwan, which he made explicit afterwards. When questioned by a member of the Diet, Suga explained that the summit statement “does not presuppose military involvement at all.” Indeed, China’s nationalistic Global Times seemed pleased at these limitations on professed support: “However, it is noticeable that the Suga administration seemed to want to distance itself from the US, with subtle divergences manifested on issues related to China that are not so close to Japan's own interests.”

In contrast, Seoul has refused to even criticize the PRC over its Hong Kong policy. However, South Korea’s reticence is understandable. The ROK was badly battered by Chinese economic retaliation in the aftermath of the Terminal High Altitude Area Defense missile deployment. The South’s trade with the PRC exceeds that with America and Japan combined. Moreover, Beijing has at least some influence in the North, which poses the most direct threat to South Korean security.

Biden says that he wants to strengthen alliances. The upcoming summit will be a good test as to his definition of “strengthen.” Is it pressing other governments to do as Washington wants or accounting for other nations’ interests, even when doing so conflicts with U.S. preferences?

Moon and Biden are at vastly different points in their respective tenures. Moon is a lame duck, with barely a year left in office. He is desperate to bring his call for detente on the Korean peninsula to fruition and post a significant accomplishment before leaving office. Biden is just starting and is more interested in getting Moon’s support for what Washington views as its most important international issue, dealing with China. Both sides could end up disappointed.