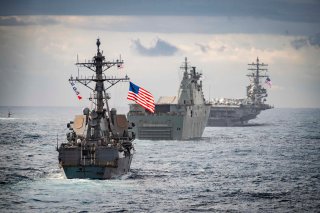 The U.S. Navy’s Ronald Reagan Carrier Strike Group will sail to the Korean peninsula at the end of this week and conduct joint exercises with the Korean Navy. The impetus for the exercises? The looming possibility of a North Korean nuclear test.

In a recent statement, the Republic of Korea (ROK) Navy explained that “by conducting combined drills, the navies of the two countries plan to strengthen their military readiness and demonstrate the firm resolve of the South Korea - U.S. alliance for peace and stability on the Korean Peninsula.”

Earlier this week, Deputy Secretary of Defense Kathleen Hicks met with South Korean vice minister of national defense Shin Beomchu at the Pentagon to reaffirm the “importance of the U.S.-ROK Alliance and the mutual commitment to maintaining a strong combined defense posture,” a U.S. Department of Defense statement explained.

The statement added that the two countries also “discussed the security environment on the Korean Peninsula and committed to continuing regional cooperation that upholds a free and open Indo-Pacific.”

Although North Korea’s last nuclear weapons test occurred in 2017, Pyongyang has launched an intercontinental ballistic missile with the range to hit the United States, violating an agreement reached in 2018 with former President Donald Trump in which North Korea appeared to pause weapons testing in exchange for a major reduction of joint military exercises with South Korea.

The Ronald Reagan Carrier Strike Group’s deployment comes on the heels of a North Korean parliamentary decision that authorized preemptive nuclear strikes in defense of the North Korean regime.

The U.S. Navy and the South Korean Navy have worked in tandem quite recently. This summer, the Republic of Korea Navy sent naval vessels to participate in the U.S.-led Rim of the Pacific exercise.

The world’s largest maritime exercise, the biennial drill involves over twenty countries and focuses on interoperability with the U.S. Navy. In addition to the surface vessels the Republic of Korea Navy sent to the Rim of the Pacific, Seoul also sent several fixed-wing aircraft.

South Korea is investing in its navy in a big way and has signaled its intent to purchase a light aircraft carrier, which would greatly expand Seoul’s ability to launch strikes on North Korea in the event of a war on the Korean Peninsula.

The Asian democracy is also preparing for a significant purchase of American F-35 stealth fighters while also going forward with its own indigenous stealth fighter design, which has likely been significantly aided by American technology.