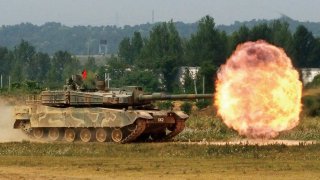 Perhaps one of the most important foundations on which South Korea’s defense strategies rest are two military doctrines, the Kill Chain strategy, which would try to forestall North Korean attack on the South, and Korea Massive Punishment and Retaliation, a serious attempt at regime change. Below, we offer a quick rundown of each and why they matter.

South Korea’s Kill Chain is in essence a detection and preemptive strategy. The doctrine is heavily reliant on South Korea’s military-political intelligence, which constantly monitors both North Korea’s domestic political situation, as well as keeps tabs on the North’s military assets. If intelligence assessments indicated that the North is preparing its military assets for an attack on South Korea, Kill Chain would target those assets. For example, Seoul would in particular target North Korea’s long-range artillery (which is among the most numerous in the world), as well as their intercontinental and ballistic missiles sites.

Though the threat from these specific North Korean assets would be difficult to eliminate completely, doing so would be of the utmost importance to defending Seoul, the South Korean capital. With a population of nearly ten million, the city is by far the largest city on the Korean Peninsula. Located a mere fifty kilometers, or about thirty miles from the Demilitarized Zone separating the two Koreas, it is particularly vulnerable to attack from the North.

Kill Chain is a preemptive measure. As such, South Korea maintains that invoking Kill Chain is not an attempt at regime change, but an operation with limited tactical goals. This is one of the crucial differences between Kill Chain and Korea Massive Punishment and Retaliation.

In addition to targeting the aforementioned missile and artillery targets, the KMPR doctrine has a broader scope that does focus on regime change by targeting North Korean leadership. Consequently, the deterring effect of KMPR is thought to be much greater than Kill Chain.

If KMPR were invoked, the Ryongsong Residence—the North Korean presidential palace—would be an obvious target, though there are certainly other places of residence for North Korean leadership. The KMPR mission is not limited to North Korean political leadership, but would also target the North’s military leadership, much of which is thought to be geographically centered in the North Korean capital, Pyongyang.

The South Korean news agency Yonhap quoted a source familiar with KMPR as saying, “every Pyongyang district, particularly where the North Korean leadership is possibly hidden, will be completely destroyed by ballistic missiles and high-explosive shells as soon as the North shows any signs of using a nuclear weapon.” The goal: complete destruction of the city, the source explained. “In other words, the North’s capital city will be reduced to ashes and removed from the map.”

The Hermit Kingdom has one of the largest standing armies in the world, at around 1.2 million soldiers. If Korea Massive Punishment and Retaliation were to be launched, a ground war of epic proportions would almost certainly follow, though how effective a North Korean fighting force would be without senior leadership remains open for debate. Still, the opening hours of either of these scenarios would be incredibly consequential. Pyongyang beware.