If the South Korea Goes to War, These Missiles Would Strike North Korea 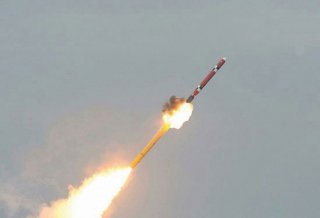 South Korea’s missile deterrence doctrine revolves around two strategies: Kill Chain and Korea Massive Punishment and Retaliation, otherwise known as KMPR. Both of these strategies are reliant on thorough surveillance of North Korean targets of interest, and the ability to accurately target and destroy these targets.

Kill Chain aims to preempt a North Korean attack on the South. If an attack is being prepared, Kill Chain would target North Korean long-range artillery, missiles, and nuclear infrastructure. Importantly, Kill Chain is not an attempt at regime change.

KMPR, on the other hand, would attempt to induce regime change in North Korea through deliberate targeting of North Korea’s leadership, both in the political and military spheres. KMPR would be initiated after an attack by the North, and thus is retaliatory in nature. KMPR would also try to hit North Korean long-range artillery, missiles, and nuclear infrastructure.

Below are just some of the weapons that would be employed if war with the Kim regime ever occurs:

The Haeseong III is South Korea’s latest edition in the Haeseong line and entered service with the Republic of Korea in 2013. It is powered by a turbojet engine, is supersonic, and is one of South Korea’s farthest-flying missiles, and has a range of 1,500 kilometers, or about 930 miles. It carries a conventional high-explosive payload.

While this may sound unimpressive, many missile’s CEP’s are measured in the dozens of meters. The Haeseong III is, therefore, a very accurate missile ideal for decapitation strikes against North Korean leadership.

Haeseong III is submarine-launched, launched from the submarine torpedo tubes. It is loaded into said tubes encased in a waterproof container, that rises to the surface after firing, and propels the Haeseong III upwards and out of the water using compressed gas. This allows the missile to be used in older South Korean submarines that lack vertical launch tubes.

The Hyunmoo-3 family of missiles comes in several variants that have steadily improved in accuracy, range, and payload size since inception.

The first variant, the Hyunmoo-3A, has a range of 500 kilometers, or about 310 miles, and is capable of reaching Pyongyang, although it lacks the range to hit some of North Korea’s more distant long-range missile sites. The Hyunmoo-3B has double the range of its predecessor and can hit any location in North Korea. The Hyunmoo-3C likely has the same characteristics as 3B, though it is sea-based rather than road-mobile. The latest variant, Hyunmoo-3D, will reportedly have a range of 3,000 kilometers, or about 1,800 miles, giving South Korea a capability against Chinese targets.

In keeping with South Korea’s deterrence-through-accuracy, the Hyunmoo-3A and B have a CEP of 3 meters, while the C variant may have a CEP of under 2 meters, making the Hyunmoo-3 incredibly accurate, perhaps the most accurate on the Korean peninsula.

There is no question that South Korea’s main security concern is its northern neighbor. This is reflected in most of the South Korean missile ranges — typically not much farther than North Korea’s northern border. This South’s high missile accuracy is further evidence of a clear and credible decapitation strategy that likely gives North Korean leadership some pause. Still, with increasingly long-range missile capabilities, South Korea is perhaps eyeing China as a regional rival, despite there relatively peaceful relationship and strong economic ties.

Caleb Larson is a Defense Writer with The National Interest.