If North Korea Attacked the South, Would Seoul Strike with Cruise Missiles? 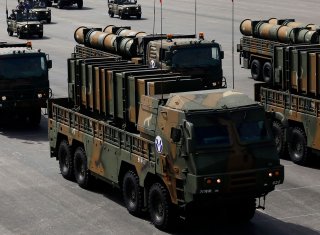 Imagine this scenario: Pyongyang launches an attack against South Korea. A mixture of ultra-long distance artillery shells, intercontinental ballistic missiles, and submarine-launched ballistic missiles strike targets all throughout the southern half of the Korean Peninsula.

South Korea’s sprawling capital Seoul, a mere fifty or so kilometers, or about thirty miles from the DMZ is particularly hard hit. With a population of nearly 10,000,000, the large metropolis is South Korea’s largest city—and an irresistible target.

The amount of destruction following an attack on the city would be nearly unimaginable. The Blue House, the South Korean President’s residence would no doubt be targeted, and South Korea’s line of succession might have to be invoked, leaving perhaps the Prime Minister, Deputy Prime Minister, or any one of the many Ministers as head of state should the President be dead or otherwise unaccounted for.

Regardless of whoever would take charge in the aftermath would almost assuredly unleash a salvo of missiles perhaps even more destructive than those that hit the South Korean capital.

South Korean is bound by a 2001 agreement with the United States that bars the development of missiles with a range over 300 kilometers and a warhead over 500 kilograms in weight. Cruise missiles, on the other hand, are not covered by that agreement—a cause of great utility to the Hyunmoo-series missiles.

The Hyunmoo-3 series are a family of missiles that generally fall into the short- to medium-ranges, though the latest Hyunmoo, the Hyunmoo-3D, would be considered more of a longer-range missile. The indigenously designed Hyunmoo series initially entered production in the mid-2000s (though development started about a decade earlier). The Hyunmoo missile series plays a crucial role in Seoul’s aptly named Korea Massive Punishment and Retaliation program and Kill Chain preemptive strike system.

The baby of the group, the Hyunmoo-3A, is road-mobile and has a modest 500-kilometer range. Though it does have the necessary range to hit the North Korean capital, North Korea’s long-range missile sites are out of the Hyunmoo-3A’s grasp and would remain unscathed by a Hyunmoo-3A retaliation.

The next of the Hyunmoo-series, the Hyunmoo-3B, has double the range of its predecessor. Virtually the entire northern half of the Korean Peninsula would be within the Hyunmoo-3B’s crosshairs. The Hyunmoo-3B is also road-mobile.

Deployed in the early 2010s, the next in the Hyunmoo lineup has even greater range, at about 1,500 kilometers. This additional range is necessitated by the fact that the missile is meant to be launched from submarines out at sea. Because it is sea-based, the Hyunmoo-3C is better protected from a surprise attack that could potentially knock out the C’s land-based siblings, though it is also deployed on a number of South Korean Navy surface ships as well. South Korea considers the Hyunmoo-3C variant a strategic weapon.

While both the A and B variants likely have a GPS-based navigation system, the Hyunmoo-3C uses a combination of GPS, inertial navigation, and terrain mapping to find its target. All three missiles are extremely accurate: rather than accuracy being measured in hundreds or dozens of meters, these missile’s accuracy is measured in single digits.

The last and latest iteration of the Hyunmoo family is still under development and not yet in service with the Republic of Korea Armed Forces. Once completed, it is rumored that the missile will have a 3,000-kilometer range and be capable of supersonic flight.

Whatever a South Korean strike would end up looking like, the Hyunmoo family would doubtless make up the backbone of Seoul’s response—and leave a path of destruction in their wake. Pyongyang beware.