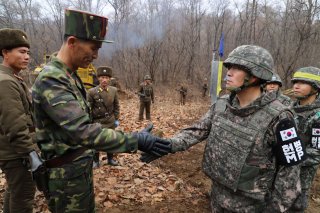 Editor’s note: John Dale Grover is a Korean Studies fellow at the Center for the National Interest. He visited Seoul for a week in early November 2019 to interview nine experts in South Korea for this project. This is the fifth piece in a five-article series, “How South Korea’s Politics and Military Impacts Strategic Stability with North Korea.” This series examines the two South Korean views—Engagement First vs. Deterrence First—over how to best interact with North Korea. The first piece introduces the problem of conflict escalation and stability in the context of North and South Korea’s militaries. The second piece looks at the Engagers’ point of view, and the third piece at the Deterers. The fourth piece sees where both groups agree and disagree, and the fifth piece concludes with how each side can help avoid a Second Korean War. Support for the reporting of this article was provided by a fellowship from Atomic Reporters together with the Stanley Center for Peace and Security and funding from the Carnegie Corporation, New York. The quotations in this article have been edited for length and clarity.

For Now, North Korea Is Here to Stay

Although economic mismanagement and strict economic sanctions have caused a lot of harm to North Korea, Pyongyang has a long history of surviving the odds. Ms. Jeongmin Kim explained, “They know how to survive different external pressures and shocks. They even survived the fall of the Soviet Union, and they are coming up with reforms such as the ‘Our style socialist economy management system,’ to become self-reliant and survive even if a deal with Washington cannot be made.”

This is why Pyongyang has created ideological justifications to allow some limited market activity. These reforms are needed in order to grow economically and improve North Koreans’ workers’ and soldiers’ access to food so they won’t starve to death. “Kim Jong-un knows he cannot really stop marketization, but I think he’s really keen on using marketization for his own regime stability. There are all these elites who have different interests. Kim Jong-un is moved from the mean of these elites as well. People talk about regime collapse, but North Korea is not a regime that can be collapsed easily.”

This resilience is why Ms. Jeongmin Kim was skeptical that regime transition or collapse is just around the corner and requires an external push. “Sometimes we talk about a bloody nose policy because we look at North Korea as if it could fall really easily. But positing regime collapse or transition too hastily leads to illogical policies, and we end up sanctioning the wrong industries. We shouldn’t look at North Korean marketization the way we look at markets in the capitalist world. Their markets are run very differently—it is not a market system.” In fact, Ms. Jeongmin Kim cautioned against assuming North Korea is guaranteed to end up under a state-capitalist system like China or that it would reform into a Western-style market economy.

Dr. Youngjun Kim more readily thinks that Pyongyang could change, but he agrees North Korea as it is today is a reality that must be dealt with for the foreseeable future. “My prediction would be maybe we can make North Korea, in the end, on our side. Who knows, in twenty or thirty years.” He gave the example of North Korean soldiers who got pulled from guard duty on the border to instead work in construction, such as the Wonsan resort. “Why? The motivation is not because Kim Jong-un is a good guy, but because they want more economic development.” This change of priorities is perhaps the best hope that internal change would one day happen—even if it takes decades.

Avoiding the Escalation Spiral into another Korean War

The reality of North Korea means that South Korea will rightly continue to maintain its defenses. Certain weapons, like a decapitation unit, do deter the other side, but they also tempt—and threaten to trigger—a preemptive attack. During a crisis, tensions are high, threats are exchanged, intentions are unclear, rumors abound, and events are fast-moving. In such a crisis, the reaction times of Pyongyang and Seoul are very short. Short decision-making times also increase the chance each side thinks they must move first before it’s too late and they are destroyed. Added to this volatile mix is the possibility of misjudgment and military accidents. All of these crisis factors create the danger that both Koreas will worry it will be hurt more if it acts too late, making war a self-fulfilling prophecy.

Consider then, how a crisis might change the way North and South Korea interpret each other’s military capabilities or whether they resort to violence. As mentioned in the introduction, Seoul created a decapitation unit in 1971 under dictator Park Chung-hee and acquired Terminal High Altitude Area Defense (THAAD) batteries to shoot down North Korean missiles in 2016 under President Park Geun-hye. Moreover, in 2016 reports detailed how the South Korean military could respond to a crisis by attempting to destroy North Korean missiles before they launched, by trying to shoot them down, or by attempting to kill the North Korean leadership as punishment for a successful attack.

During a crisis, it is not hard to imagine these options being considered. Although it seems less likely that an Engager administration would launch a preemptive attack on North Korea, that cannot be ruled out if it appeared a North Korean nuclear attack was imminent. Any South Korean President would be hard-pressed if they thought both countries had passed a point of no return.

Engagers and Deterers may never fully agree on the best way forward, but they both generally want to avoid armed conflict. As Captain Sukjoon Yoon argued to TNI, “Conducting any kind of surgical strike pinpointed on Pyongyang means regime change, but what happens next, and what does China do?”

The stakes for South and North Korea are regime and national survival. These concerns drive each country to pursue stability—at times through developing stronger militaries but also through periods of diplomacy and détente. Can Seoul get the balance right?

Finding the Right Balance of Tools

South Korean liberal and conservative leaders overall broadly support a first-class military and know that talking to North Korea is vital. Sticking to one paradigm not only causes Seoul’s policies to become myopic—it is also unsustainable given the sharp divides in South Korean politics. Both the current and future administrations in Seoul will need to base their policies on the likelihood that North Korea isn’t going to collapse soon and that Washington probably won’t change its demands for up-front denuclearization. So the question is one of balance between the Engager and Deterer approaches and how each group can help prevent an escalation spiral into a second Korean War.

There are several tools to avoid this horrible scenario from ever happening. Engagers rightly recognize North Korea does actually feel threatened by certain weapon systems or exercises. At the same time, Deterers are right about the need to project strength—but Seoul can deter North Korea without appearing too threatening. This is a crucial point that Dr. Youngjun Kim emphasized to TNI. “Now we’re in the denuclearization process, so maybe we have to stop joint exercises temporarily for one or two years to support diplomatic talks between the United States and North Korea, because the nuclear threat is the number one threat. Instead, we need to expand more exercises with America in other places, like South East Asia, Australia, in Hawaii, or even in Kansas or the Northern Sea. Nobody can complain because the location is too far. We need to expand our alliance’s military exercises—but not inside the peninsula, which will send the wrong signal to North Korea and the denuclearization process.” These kinds of creative ideas might provide a way to deter a potential enemy without causing them to panic.

This is the lesson U.S. President Ronald Reagan learned during the Cold War. He drastically ramped up American military spending and rhetoric. This included holding some of the biggest wargames with America’s European Allies in 1983—Able Archer 83. Those war games were, to Washington, obviously defensive in nature. Americans weren’t thinking about starting World War III. However, Moscow was scared and genuinely thought the exercises were a pretext for a surprise invasion. U.S. intelligence noticed the Soviet Union panicked and made preparations for nuclear war, only to eventually back down when Able Archer ended. This struck President Ronald Reagan as a shocking revelation and convinced him to pivot to diplomacy, eventually signing the Intermediate-Range Nuclear Forces Treaty with Moscow and laying the groundwork for what would become the Strategic Arms Reduction Treaty. This example shows even a Deterer like President Ronald Regan understood that a rival country had its own fears and that arms control combined with strength and diplomacy can work. It is not inconceivable that some South Korean Deterers might eventually come to a similar conclusion.

Furthermore, inter-Korean exchanges might also be helpful for building connections and fostering goodwill. For example, Dr. Youngjun Kim suggested that, although they are tricky, civilian exchanges wouldn’t violate sanctions. He argued that South and North Korea could “exchange military observers to each other’s exercises,” a concept that “was already agreed to in 1991,” and so is not a radical idea. Additionally, he pointed out that “Military exchanges to Kim Il-Sung Military University and Korean National Defense University could have a joint seminar on a nonpolitical topic regarding nontraditional security such as climate change. Or some kind of joint seminar between South Korea, North Korea, and America could be held regarding peacebuilding or how to build joint peacekeeping forces.”