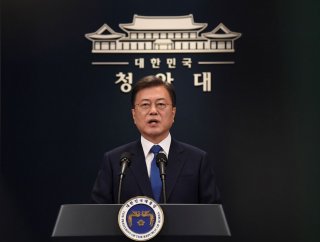 Editor’s note: John Dale Grover is a Korean Studies fellow at the Center for the National Interest. He visited Seoul for a week in early November 2019 to interview nine experts in South Korea for this project. This is the second piece in a five-article series, “How South Korea’s Politics and Military Impacts Strategic Stability with North Korea.” This series examines the two South Korean views—Engagement First vs. Deterrence First—over how to best interact with North Korea. The first piece introduces the problem of conflict escalation and stability in the context of North and South Korea’s militaries. The second piece looks at the Engagers’ point of view, and the third piece at the Deterers. The fourth piece sees where both groups agree and disagree, and the fifth piece concludes with how each side can help avoid a Second Korean War. Support for the reporting of this article was provided by a fellowship from Atomic Reporters together with the Stanley Center for Peace and Security and funding from the Carnegie Corporation, New York. The quotations in this article have been edited for length and clarity.

Inter-Korean Relations Must Be Improved

Dr. Chung-in Moon the special advisor for unification, diplomacy, and national security affairs to South Korean President Moon Jae-in and one of the chief proponents of talking with North Korea. When asked about strategic stability, the first thing he said was, “We want peace.”

“Strategic stability means management of unstable peace. I see that the major threat to strategic stability on the Korean peninsula is obviously North Korean nuclear ambitions and very unstable inter-Korean relations.” To fix this, Dr. Chung-in Moon recommends transitioning from managing an unstable peace to building and maintaining a stable one.

In the view of many Engagers, the relationship between both Koreas—and also between North Korea and the United States—needs to be repaired if there is to be any lasting improvement. Additionally, this peace process would require mutual arms reductions.

Engagers acknowledge that strategic stability is, in part, underpinned by the South Korean-United States military alliance and Seoul’s own military spending. The alliance and South Korea’s military have a role in each step towards peace. However, not all Engagers agree on what that would look like.

“In keeping, making, and building peace, we need the American alliance. However, for President Moon Jae-in, the most important task is to prevent the outbreak of war,” Dr. Chung-in Moon told TNI. This is why Engagers are worried about both South Korean Deterers and America’s policy of maximum pressure. They are concerned a wrong move could cause North Korea to overreact, sparking an escalating crisis no one can stop.

Dr. John Delury is a professor of modern Chinese history and an expert in Korean peninsula affairs at Yonsei University. He took the view that permanent peace is necessary, but getting there is destabilizing because it changes what people are used to. “The whole point would be to arrive at a new steady state. But a new stability predicated on getting along, not predicated on hostility, confrontation and keeping apart.”

He elaborated, “The current stability is predicated on keeping apart—that’s what the armistice does. And in peace you don’t keep apart, you can interact. Also, the current stability is predicated on fear.” North Korea’s fear of South Korea and America does help keep the peace, but it is a very dangerous way to do so indefinitely. Dr. John Delury acknowledged, “It did work during the Cold War.” But he questioned whether maintaining that “existential fear of the other” was really all that could be accomplished.

Improving inter-Korean relations requires thinking outside the box and hard work, rather than accepting the status quo as inalterable. “Deterrence gets glorified and treated as something almost sacred sometimes. And sometimes it is the best you can do, and it’s better than war, but it’s not better than peace,” insisted Dr. John Delury to TNI.

Dr. Ki-jung Kim, a professor of political science and international relations at Yonsei University and former adviser to President Moon, also believes there needs to be a better way. “Peace is imperative,” Dr. Ki-jung Kim declared to TNI. “We are in desperate need to stabilize Korean relations, and peace should be restored. Eventually, we are going to establish a peace regime through a peace treaty.”

At the same time, Dr. Ki-jung Kim told TNI that South Korea’s military is important in the interim. He knows this may sound contradictory to critics, but armed forces are part of the first of three steps on the way towards a peace regime. Both Dr. Chung-in Moon and Dr. Ki-jung Kim described those three steps as “peacekeeping, peacemaking, and peacebuilding.” For many decades, Seoul and the U.S.-South Korean Alliance have been focused only on the first step—peacekeeping—through the use of military power. But now Engagers are eager to get on with the second and third steps. “We cannot give up peacekeeping deterrence right away. But that method, that way of peace, will hopefully be decreased in the future,” emphasized Dr. Ki-jung Kim.

Engagers generally believe Pyongyang is acting defensively. To them, North Korea acts tough and builds nuclear weapons to defend itself, not because it wants to attack or blackmail Seoul. Moreover, Engagers see tensions as structural—caused by the absence of a peace treaty and a lack of substantial inter-Korean trade.

Dr. Chung-in Moon told TNI that Pyongyang sees joint South Korean-American military exercises as provocative preparations for an invasion. This is especially the case when America deploys nuclear-capable bombers nearby or when Seoul acquires cutting-edge weapons, like stealth fighters. “Our rationale was to acquire offensive weapons that can penetrate North Korean airspace without being detected by North Korean radar and attack North Korean weapons of mass destruction sites. North Korea is extremely worried about these kinds of things. And most importantly, we have the ROK-U.S. combined forces command and we have American forces here. Therefore, North Koreans think that they are facing not only the threat from South Korea, but from America... Of course, our side argues these are all defensive, but North Korea doesn’t perceive it that way.”

This problem of perception came up repeatedly. Dr. Ki-jung Kim noted the Korean War’s legacy has been difficult to overcome, and both Koreas are security-sensitive. He mentioned Korea as a whole was historically surrounded by large powers and that this remains the case today, driving defense spending. “We bought the new weapons [from America] not for or against North Korea at this moment. We are only preparing for possible future warfare, and that’s why we need to keep increasing our capability to overcome our small power mentality. For that, maybe North Korea misunderstood a bit, and there was insufficient dialogue.”

Indeed, Dr. Ki-jung Kim framed North Korea’s complaints partially as the result of failed communication but also on Pyongyang’s difficulty understanding what is currently politically feasible. He pondered, “Maybe we have partly failed to persuade North Korea, even though we are maintaining communication and dialogue since early 2018. But as I’ve said, North Korea is still expecting and demanding too much.”

Ms. Jeongmin Kim, a nonpartisan Seoul correspondent for the highly-respected site NK News, saw how South Koreans could see Pyongyang’s complaints either way. She explained that Pyongyang’s complaints change over time and this pattern must be taken into account. Ms. Jeongmin Kim also warned that any statements by North Korea need to be put in their context instead of exaggerated. “Pyongyang may claim Seoul is allegedly breaking this or that political or military agreement, but North Korea might be vague about which agreement, what they want done or if there’s any possible exchange in the offing.” Sure, Ms. Jeongmin Kim told TNI, a given South Korean weapon system might be genuinely seen as destabilizing. But “even if North Korea says drills and the acquisition of the F-35 should be stopped—these should not be seen as a tit for tat. They’re not saying if you actually acquire F-35s that they’ll do such and such [in response].”

Indeed, Dr. Chung-in Moon reflected on this security dilemma in which both sides need to maintain their defenses, even though the other will usually find that provocative. Dr. Chung-in Moon asserted this makes tension-reduction harder, but that’s why Pyongyang wants “double suspension” in which they cease ballistic missile and nuclear tests in exchange for Seoul and Washington halting military exercises. Moreover, North Korea claims President Donald Trump privately agreed to a double suspension during the 2018 Singapore Summit and yet keeps breaking it. “The best way of understanding all of this is the contradiction between peacekeeping [military drills and purchases] and peacemaking [through suspension and negotiations]. We want both, but North Korea refuses to understand our good intentions.”