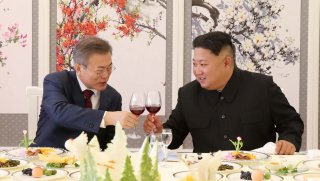 Former South Korean president Moon Jae-in vowed that he will give up two dogs that were gifted to him by North Korean leader Kim Jong-un four years ago.

In a bizarre story out of South Korea, Moon announced that he will give up the two white Pungsan dogs, named Gomi and Songgang, that were a gift from Kim following their summit in 2018, The Guardian reported. Moon was allowed to keep the dogs after he left office earlier this year, but the former president will now give them up, citing “a lack of support from his successor.”

The dogs had been designated as state property but Moon was given permission to keep them. However, his successor Yoon Suk-yeol appears to disapprove of that arrangement, or at least the money required to sustain it.

“The presidential office seems to be negative toward entrusting the management of the Pungsan dogs to former President Moon,” Moon’s office said on Facebook, as cited by the newspaper.

“If that’s the case, we can be cool about it, as such an entrustment is based on the goodwill of both sides ... though ending it is regretful given they are companion animals he grew attached to.” Yoon's office, however, told The Guardian that the situation was still under discussion.

According to CNN, the dispute is at “the center of a political dispute in South Korea after the country’s former President said he was giving them up over an apparent lack of legal and financial support from his successor to care for the animals.”

As noted by CNN, gifts of dogs are often a feature of diplomacy between the two Koreas, with Kim’s father and predecessor Kim Jong Il two Pungsan puppies, Uri and Duri, to then-President Kim Dae-jung, who gave his North Korean counterpart Jindo dogs named Peace and Reunification.

Yet, there has been very little diplomacy in recent years between Seoul and Pyongyang. North Korea cut communication lines with South Korea in the summer of 2020, in a decision attributed to Kim’s sister Kim Yo Jong.

The state-owned Korean Central News Agency (KCNA) said at the time that the move was in response to anti-Kim leaflets that were distributed in North Korea around that time. KCNA called it “the first step of the determination to completely shut down all contact means with South Korea and get rid of unnecessary things.” Not long after that, North Korea physically destroyed the liaison office that had been set up for communications between the countries.

Since then, the two countries have clashed often with North Korea frequently launching missiles in the direction of its southern neighbor.