Joseph S. Nye: How a Joe Biden Administration Could Negotiate with North Korea 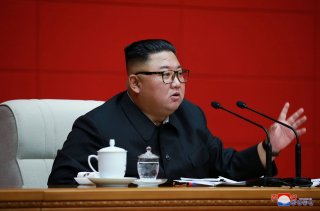 President Trump was only the latest American to deceive himself into believing he could negotiate denuclearization with North Korea. But Kim Jung-un does not want to give up his weapons, and North Korea has announced that it has essentially mastered nuclear strike capability and become a full-fledged nuclear state.

It is important to dispose of several myths that interfere with a clear analysis of the situation. First, Kim Jung-un may be a dictator, but he is not crazy or suicidal. Thus far, he has outplayed the U.S. and China in this high stakes game, but he understands that a nuclear exchange with the U.S. means the end of the regime he is trying to preserve. Second, we often exaggerate how much power Kim’s rocketry gives him. North Korea has had nuclear weapons for more than a decade, and they can be delivered to East or West coast. Third, in his game of bluff and chicken, geography provides North Korea with local escalation dominance. With thousands of artillery tubes hidden in tunnels near the border, North Korea can threaten to wreak havoc on Seoul by conventional means. The U.S. found this out in 1994 when it considered a preemptive strike to destroy the Yongbyon plutonium reprocessing plant that violated the NPT but discovered that its allies in South Korea and Japan were deterred by the risk of conventional retaliation, this long before the North had a nuclear weapon.

Much depends on how one assesses Kim’s objectives. If all he wants is security, we could leave him alone, perhaps sign a peace treaty, relax sanctions, and let economic growth change the regime over time. But the Kim regime in North Korea is not a status quo power. Since 1945, it has been an oddity as a hereditary communist dictatorship whose legitimacy rests on claiming to be the vanguard of Korean nationalism. Thus far it has fallen behind in economic competition with the South, but it hopes its nuclear status will change the balance. Some analysts believe that menacing the U.S. is a means of isolating and exercising dominance over Seoul and a means for the regime of Kim Jung-un to ensure its long term survival. If weakening the ties between the U.S. and South Korea is central to Kim’s strategy, then removing U.S. troops plays into his hands. And so rather than reduce risks, it may actually embolden the North to return to risky conventional pressure on South Korea such as it exercised in 2010 when it sank a South Korean frigate and shelled South Korean islands.

A new administration taking a new approach could try a negotiated package, although the prospects are not good, but, if it fails, the U.S. and South Korea should not panic. The alliance could still keep the peace until there is change in North Korea. If the U.S. could deter a much stronger Soviet Union from taking an isolated West Berlin for three decades, we can deter North Korea. We should reinforce our defense capability regarding our alliances with South Korea and Japan. We should stay in constant diplomatic talks with China. We should agree that North Korean nuclear exports or aggressive actions towards South Korea will be met with punitive sanctions The presence of nearly 50,000 American troops in Japan and some 28,000 in Korea makes our extended deterrence credible. Kim cannot kill South Koreans or Japanese without killing Americans, and that would mean the end of his regime. If Seoul, Washington, and Beijing work together to play the long game, containment can work.

Joseph S. Nye, Jr. is University Distinguished Service Professor Emeritus at, and former Dean of, Harvard University’s Kennedy School of Government as well as author of Do Morals Matter? Presidents and Foreign Policy from FDR to Trump. He previously served as Assistant Secretary of Defense for International Security Affairs, Chair of the National Intelligence Council, and Deputy Under Secretary of State for Security Assistance, Science, and Technology.