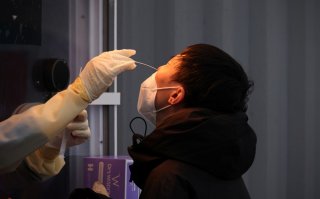 The rapid spread of Omicron has caused South Korea to reimplement mandatory quarantines for most travelers and block entry from Nigeria. The Omicron variant of coronavirus has been observed spreading locally in South Korea at the same time that surging caseload of existing variants has already pushed the total past 5,000 cases a day.

A pastor and his wife returning from a visit to Nigeria for a religious conference in mid-November were the first two confirmed cases, along with an Uzbek male who picked them up from the airport. Two Korean women in their fifties also returned from Nigeria with Omicron infections, testing later showed, and multiple cases of local transmissions have since been confirmed, with dozens more suspected.

The pastor couple is under investigation for misleading health officials, as they initially claimed to have used a specialized quarantine taxi for their airport transportation. Arranging for private transportation with friends or family is allowed, but the authorities must be notified to allow for contact tracing.

The acquaintance who picked them up, who later tested positive, continued to shop and meet people for six days. The couple themselves also avoided quarantine for one day, as they qualified for exemption for vaccinated individuals at the time, before their tests came back positive. More than eighty people were found to have come into contact with the male pastor and the driver, according to The Choson Ilbo, and six of the driver’s contacts have tested positive for coronavirus.

Additionally, members of the pastor’s church in Michuhol district of Incheon have been found to have been infected. One congregant who had been in contact with the pastor attended a meeting with over 400 others at the church on November 28 and was found to have been infected with Omicron. As of December 3, there were eleven confirmed cases linked to the church, with 848 people under investigation, according to The Hankyoreh.

Health authorities responded by adding Nigeria to the list of countries subject to entry restrictions and strengthening quarantine measures. Flights from Ethiopia to Incheon have been suspended for two weeks.

While travelers from abroad must quarantine for ten days, anyone who has had contact with individuals infected with Omicron must quarantine for fourteen days, regardless of vaccine status. In terms of its impact on celebrity news (less so on individual people facing hardship), that means the band BTS will miss the 2021 Mnet Asian Music Awards, where they are in the running for three awards, including Best Male Group, as they are currently touring the United States.

Heightened social distancing rules were also applied to Seoul and the surrounding area. Groups must be limited to six, down from ten before, and the vaccine pass will be expanded to cover restaurants, bars, museums, and other facilities that had been exempted. Both ideas were said to be under consideration when President Moon Jae-in announced at the end of November “no retreat” from a policy of “Living with Covid-19.”

While the new changes are still more relaxed for vaccinated individuals than the rules before the re-opening, they did strike some as an abrupt and yet too-limited shift from the government’s previous announcement less than one week ago.

The infection of the pastor couple was taken as a worrying sign about Omicron’s potential to bypass a body’s immune defenses. Both the man and woman had completed their second doses of Moderna on October 28. Seven out of nine of the cases of community spread at the church, however, were of unvaccinated individuals.

“It is a situation where we cannot rule out the possibility that the vaccine efficacy against the Omicron variant will be significantly reduced,” Kim Woo-joo, a professor at the Department of Infectious Diseases at Korea University’s Guro Hospital, was quoted as saying.

The wife of the pastor said in an interview with the JoongAng that she took her mask off in Nigeria after seeing that most of the locals did not wear masks. “I didn’t plan for it to be like this,” she said, adding that she couldn’t sleep well.

The number of cases has already been rising before the arrival of Omicron, surpassing 5,000 for multiple days in a row. The total of 5,325 cases recorded on December 3 was about 1,200 more than the previous record on November 23. 80 percent of them were detected in the Seoul Capital Area, where half of Korea’s population lives. The total number of deaths since the pandemic started is on pace to surpass 4,000 in the coming week.

Opposition presidential candidate Yoon Seok-youl criticized Moon’s handling of coronavirus, writing on Facebook on December 1 that “the medical system is collapsing,” and “we need urgent measures” to address Omicron.