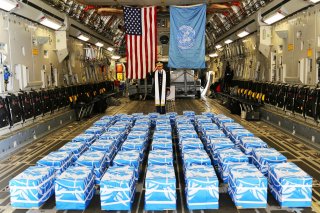 Americans had not yet recovered from World War II when the Cold War began. Then in June 1950 the conflict turned very hot on the Korean peninsula. Although army generals and State Department officials had written off the authoritarian and aggressive, yet under-armed, Republic of Korea before it was invaded by the North, President Harry S. Truman decided to make the ROK’s cause America’s own.

The consequences of that decision were many and significant. Three and a half years of horrific war ensued. The conflict effectively turned NSC-68, then but a hawkish State Department policy proposal, into America’s foreign policy, militarizing the Cold War. At little cost Joseph Stalin entangled the United States and its allies in a bloody and unpopular conflict. The People’s Republic of China became an implacable enemy of America and promoted revolution worldwide. The unpopular war intensified partisan divides at home.

The impact of the conflict continues. The peninsula remains divided, the border remains heavily armed, America remains ensnared militarily, Moscow and Beijing remain behind Pyongyang, and the North remains formally committed to reunification, perhaps violently. Although the end of the Cold War reduced the likelihood of another great power clash over the peninsula, North Korea has developed nuclear weapons, making any renewed combat far more dangerous. Thus, the search for a peaceful settlement remains an imperative, despite the seemingly endless barriers, failures, and frustrations.

What can we learn from the “forgotten war” that started seven decades ago?

Lesson one is to beware casual commitments. As the war in the Pacific rushed to its welcome close, Washington proposed dividing the occupation of Korea, then a Japanese colony, with the Soviet Union. Doing so saved half of the peninsula from tyranny.

But Washington was ill-prepared to oversee a country about which it knew nothing. Future Secretary of State Dean Rusk was one of two army officers ordered to find a dividing line between occupation zones, forcing them to consult a National Geographic map. Virtually none of the occupying troops or officials spoke Korean, giving expatriate Syngman Rhee, who spoke English, an unfortunate advantage in the ensuing struggle to lead the South.

Lesson two is to choose leaders carefully. While exiled in America, Rhee enthusiastically promoted the liberation of Korea. However, he was an awful choice to head a new nation. Difficult, stubborn, irascible, and autocratic—he established a dictatorship that jailed and killed opponents. Washington so distrusted him that the State Department would not give him a passport, so he had to get a lift from the Pentagon. And the Truman administration would not arm his military with heavy weapons, lest he fulfill his pledge to march north to liberate the peninsula. A lack of such weapons then left him vulnerable to the Soviet-backed invasion. He also was an uncooperative wartime partner, doing what he could to block the armistice and force Washington to fight for victory, for which there was minimal support in the U.S.

Lesson three is to make a decision and back it. The U.S. withdrew its occupation troops in 1948, leaving the weak South Korean state essentially alone among enemies. In early 1950, Dean Acheson famously excluded the peninsula from the U.S. “defense perimeter.” Even General Douglas MacArthur acknowledged that Korea was not essential for America’s defense.

However, once the ROK faced military destruction Washington rushed in ill-prepared troops lest the South’s fall demoralize Asian and European allies. It would have been better to have made a decision one way or the other and stuck with it. Since the administration was prepared to defend the South, it should have made appropriate military deployments and communicated its intention to the DPRK’s Kim Il-sung and his patron Joseph Stalin.

Lesson four is that it is stupid not to talk to your adversaries. The Korean War appeared to be coming to a dramatic but early close in October 1950 as the U.S.-led forces captured Pyongyang and neared the Yalu River border with China. However, Mao Zedong and the Chinese Communist Party had ousted Chiang Kai-shek’s government the previous year. After the latter relocated to Taiwan, the U.S. protected the rump state with the Seventh Fleet. Beijing decided that it would not tolerate American troops on its border and unsuccessfully sought to warn the United States to back away. Direct talks might have yielded a modus vivendi, perhaps a new border from Pyongyang to Wonsan, preserving a buffer state for the PRC. Alas, that was not to be; the entry of hundreds of thousands of PRC “volunteers” intensified and extended the war.

Lesson five is to follow the Constitution and get a declaration of war. The Truman administration’s failure to request congressional approval for intervening appears to have been more careless than malicious, but it was a significant mistake. Involvement in what Truman bizarrely called a “police action” immediately became a partisan issue. Having failed to stage a public debate and win Republican congressional support, the war intensified the bitter political divide after the military campaign faltered and an unpopular stalemate ensued.

Lesson six is that limited stakes warrant limited war. MacArthur wanted to take the war to China, which became the decisive combatant once North Korea’s military was essentially destroyed. He was not alone: the Pentagon pondered using nuclear weapons, imposing a naval blockade, destroying ports and railways, mining rivers in the PRC, supporting guerrillas in the mainland, and deploying Nationalist forces. These would have meant full-scale war with China and could have drawn in the Soviet Union, with horrific consequences. The Truman administration made the right decision: Korea was not worth another world war.

Lesson seven is that changing circumstances warrant changing policies. The PRC’s intervention in Korea turned Chinese communism from a theoretical threat into an active menace. Two decades later the revival of older geopolitical realities caused Washington and Beijing to talk and cooperate against the Soviet Union. Britain’s Lord Palmerston was correct: there are no permanent friends and enemies, only permanent interests.

This principle has obvious application to the peninsula today. Although North Korea remains totalitarian, it has demonstrated its willingness to talk. More important, the ROK has been vastly transformed for the better. There is no reason that treaties, commitments, and deployments from 1950 or 1953 should remain inviolate today. There certainly is no reason that America must remain entangled, the security of its homeland now possibly at risk from North Korean nuclear attack.

The Korean War might have been forgotten by the American people, but its consequences live on. And it could be years if not decades more until the United States is able to finally escape that conflict’s ill impacts.