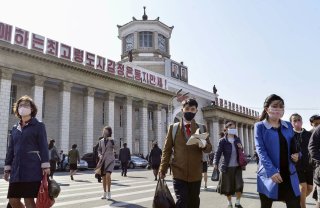 For the last two years, the North Korean regime has repeatedly claimed to have had no COVID-19 cases at all. The regime has put in place draconian restrictions and other measures to mitigate the effects of the pandemic, but it has always continued to report zero cases. Throughout it all, many public health and North Korea experts have made it clear that they don’t believe the regime really kept the country COVID-free.

Now, that has suddenly changed. According to Yonhap News Agency, North Korea has announced its first case of the Omicron variant of COVID-19, leading the government to implement a "maximum emergency" virus control protocol. North Korean leader Kim Jong-un was present at a Politburo meeting on the outbreak and wearing a mask, something he is believed to have not done in public until now.

Per the Yonhap News Agency, regime officials “concluded that samples collected from fever-ridden patients on Sunday in Pyongyang were identical to omicron.” The government did not say exactly how many cases have been reported in the capital or how it tested for the virus.

The regime also vowed to "root out the source of transmission in the shortest period possible.” Some reports, including one from the BBC, interpreted this as a call for national lockdown by the Kim regime.

“True to the intention of the Party that gives first priority to the emergency epidemic prevention work in the state affairs, public service units in Pyongyang City are focusing all efforts on further cementing the anti-epidemic position,” state news agency KCNA said Wednesday, per KCNA Watch.

“The Changgwang Health Complex, the Ryugyong Health Complex and other health complexes demand that customers abide by anti-epidemic rules such as hand-disinfecting, mask-wearing and distancing for epidemic prevention and push ahead with the work for creating a hygienic and cultured environment.”

Over the last two years, North Korea has continually reported zero cases of the virus to the World Health Organization and rejected international efforts to provide vaccines.

A CNN analysis says that the lack of vaccines in North Korea could “spell disaster.” “An outbreak in North Korea, which has limited testing capabilities, inadequate medical infrastructure, and which has isolated itself from the outside world, could quickly become deadly,” the analysis said.