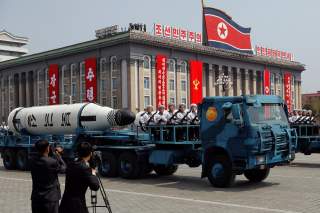 Last week North Korea tested a missile potentially deliverable from a submarine, although it may, in fact, have been tested from an underwater barge. The administration of U.S. President Donald Trump has shrugged this off, however. Scheduled working-level talks with North Korea went forward. This has been its standard practice all year. North Korea has tested one short-range missile after another in 2018. Trump and his team have said little though.

Trump asserts – albeit with little independent corroboration – that he and North Korean leader Kim Jong Un have an agreement that Kim will not test a long-range missile. Call it a ‘gentleman’s agreement,’ as none of the statements between Kim and Trump in the last eighteen months actually commit Kim to such restraint. Nevertheless, Trump has hyped this idea for a while, and Kim appears to be sticking to it, or at least dancing around it with short-range tests which do not quite violate its spirit.

A submarine-launched ballistic missile (SLBM) pushes this agreement to the breaking point. Trump’s critics will claim it reveals Trump’s ‘deals’ as the fictions they have always been. Kim has technically not tested a long-range missile. The flight trajectory itself only took the missile a few hundred miles across the sea into Japanese waters. But with the mobility of a submarine, an SLBM obviates the value to the U.S. of a North Korean long-range test ban.

The logic behind the gentleman’s agreement, obviously, is that North Korea would not test a rocket that could strike the continental United States. This itself raises problems: short-range missiles threaten U.S. regional allies, most especially Japan. That Trump has said little about such testing must send a loud signal to American friends out here that Trump will cut them loose for a deal with Kim. This ‘decoupling’ of U.S. regional partners from the U.S. under North Korean pressure has long been the major political threat of the Northern missile program. It is disappointing that Trump seems unaware of this.

But an SLBM undercuts all this. Now a short-range missile could still hit the U.S. mainland. North Korea could park a submarine off the U.S. West Coast and strike its cities with a missile that is not long-range. In other words, the Trump-Kim long-range test moratorium understanding is meaningless. Kim has slipped around its intended impact without formally violating it. This sort of hair-splitting evasion is classic North Korean bargaining behavior. For those who think Trump is being played by the North, this is powerful confirmatory evidence.

Ironically, an SLBM does resolve the de-coupling problem though. By placing the U.S. mainland under threat again, North Korea has driven the U.S. and its Asian regional partners back together, at least on this issue. The Japanese are likely secretly a bit happy about this turn of events.

The good news is that North Korea is technologically far behind, so its submarines are almost certainly loud, diesel-powered vehicles. And certainly, the U.S. would make a massive search effort should a North Korean submarine ever leave port. This is likely not a ‘game-changing’ event in itself.

But it does signal two obvious problems for Trump:

1: It clearly indicates North Korean bad faith, especially as this test occurred just before another round of talks. Team Trump can ignore this, but the many critics of Trump’s outreach to North Korea will not. Trump is now wide-open to a critique that his ‘friendship’ with Kim is an end in itself for Trump, blinding him to Kim’s increasingly obvious violations of any ‘deal’ the two have. Trump is also vulnerable to the complaint that he is desperate for any sort of deal with the North for his 2020 re-election effort.

2: The SLBM also demonstrates North Korea’s continuing commitment to a wide, fully elaborated nuclear and missile arsenal. It is true that Pyongyang has halted nuclear tests, as Trump regularly reiterates. But Trump correspondingly ducks that Pyongyang has moved on to production. An obvious interpretation is that the North’s testing has taken it far enough for now. It can, therefore, halt testing as a pseudo-concession to the Americans, talk to Trump in the long-shot hope that some deal might emerge (why not see what the Americans offer?), and meanwhile produce en masse what had previously been tested.

It is unclear how or even if the U.S. will respond. Trump is trapped because his rhetoric on North Korea has been relentlessly upbeat for the last eighteen months. After his first meeting with Kim in Singapore last year, he tweeted that the North Korean problem was solved. Trump has claimed repeatedly that Kim is his friend. He even stated that he and Kim fell in love. Trump officials have repeatedly claimed that sky-high goals like ‘complete, verifiable irreversible disarmament’ are in the mix.

In reality, none of this is likely true. Trump needs to start admitting to the U.S. public that North Korea is not, in fact, going to surrender all or even most of its weapons and that the U.S. will have to make some pretty steep counter-concessions for the North to give up any of them. This is not impossible. The Iran deal of the administration of former President Barack Obama is a possible template. But Trump will have to dramatically change the manner in which he discusses North Korea before the U.S. public and Congress. This is unlikely.