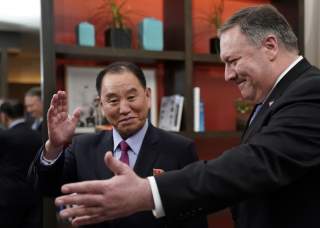 Despite deep skepticism in Washington behind a second Trump-Kim summit, both leaders have doubled-down on engagement. However, a grand bargain in which North Korea declares all its nuclear and missile sites, much less commits to earlier U.S. demands for complete, verifiable, irreversible denuclearization, is highly unlikely. Likewise, hopes from Pyongyang that the Trump administration will offer major sanctions relief prior to denuclearization are also based in wishful thinking. Is there any point, then, in holding a second summit?

If the alternative is the current impasse in U.S.-North Korea relations, or worse, the return of brinkmanship and “fire and fury” rhetoric, then the answer is yes. Moving in a stepwise fashion, a plausible good outcome for a second summit might include the following concessions:

For North Korea, a more accurate accounting of current nuclear sites, followed by some commitment to permit monitoring and verification by a third party could help break the impasse. A willingness to address human rights and ongoing humanitarian issues would also go a long way in signaling North Korea’s intentions—in particular a shift towards economic development and modernization as emphasized in Kim’s New Year’s Day speech.

For its part, the United States might carve out limited sanctions relief on North Korea which pertain to inter-Korea relations. Such a move offers concessions to North Korea on the sanctions front, gives a diplomatic nod to South Korea, and advances the goal of peace. The U.S. might also suggest opening a U.S. diplomatic mission in Pyongyang to facilitate future dialogue. This might be an appropriate step leading to a more formal declaration of peace and full diplomatic recognition of North Korea. The U.S. could also ease visa restrictions to allow for greater technical and scientific exchanges between Americans and North Koreans.

In the spirit of reducing military tensions, the U.S. might again modify or reduce joint military exercises (in consultation with South Korea) in return for North Korea’s curtailment of its missile program.

There is the risk that Trump gives too much, that negotiations lead to nowhere, or that Kim bides time to ease sanctions while advancing nuclear and missile capabilities. At this point, however, the path to denuclearization and peace stands a greater chance through dialogue than non-engagement or maximum pressure alone. Kim may have every intention of holding onto his nukes today. But it is also possible that in taking a phased approach to denuclearization, external and internal dynamics in North Korea begin to shift, altering Kim’s own strategy for survival.