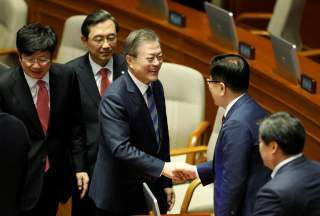 The U.S. confrontation with North Korea has lasted for nearly seventy years, by far the longest conflict in American history. The war that killed tens of thousands of Americans and millions of Koreans on the Korean Peninsula in the early 1950s was suspended by an armistice and has still not reached a definitive conclusion. One could hardly expect such a history to be laid to rest by a single summit meeting between the leaders of the two countries, as unprecedented as the Singapore summit was.

Critics of the summit point out that North Korea has not agreed to “complete, verifiable, and irreversible” denuclearization as a precondition for improved relations with the United States, but such a narrow focus on the nuclear issue misses the larger historical conflict in which the nuclear problem is embedded. The North Koreans are unlikely to give up their nuclear arsenal while they see America as an existential threat. Nor is the United States likely to drop sanctions and normalize relations with Pyongyang while North Korea continues to develop its nuclear program.

A more realistic way forward would be for the United States to ease sanctions gradually while North Korea maintains a freeze on weapons testing and takes steps to dismantle its nuclear and missile programs. Normalization of U.S.-North Korea relations can come as the final result of this process; in the meantime, a declaration formally ending the Korean War should be an important step forward in reducing tensions and undercutting Pyongyang’s rationale for its nuclear program, without compromising the security of America or its allies in East Asia.

Of course, it is far from certain that the second Trump-Kim summit will lead to a peace declaration or a working framework for denuclearization. But both governments have laid the groundwork for negotiations in recent weeks with exchanges of envoys and working-level discussions aimed at setting the agenda for the upcoming summit. Meanwhile, North Korea has maintained its testing freeze, while taking some steps to dismantle its missile and nuclear facilities. While the North Koreans have asked America to offer “corresponding measures”— perhaps the easing of some sanctions—it has yet to meet the U.S. demand to offer a list of its nuclear sites. The road ahead in U.S.-North Korea relations will be long and difficult, with its share of obstacles and reversals. But for now, at least it is a road away from conflict and toward peace.

Charles K. Armstrong is The Korea Foundation Professor of Korean Studies in the Social Sciences at Columbia University.