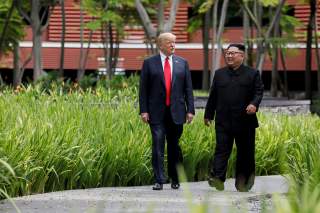 A year ago, at the height of the “fire and fury” with North Korea, I was one of over a million people in Hawaii who got the emergency alert on our cell phones telling us we were about to be hit by a nuclear missile. We knew Kim Jong-un had targeted Hawaii, that we were on the “map of death.”

The Singapore Trump-Kim summit defused the bluster, lowered the tensions, reduced the likelihood of a nuclear weapon being fired in anger, and ultimately resulted in North Korea’s suspension of missile launches and tests.

In Hawaii, this was a relief, but we take no great comfort. As U.S. intel chiefs just affirmed, the prospect of progress on denuclearization is low. It is folly to think that Kim has forgotten the lesson of Libya, of Gaddafi’s horrific fate after canceling his nuclear weapons program, while the Trump administration now seeks to topple the leader of Venezuela. And ramps up a nuclear war-fighting posture. And resists a multilateral approach with North Korea’s neighbors China and Russia—the most likely approach to succeed in the long run. And why would Kim trust an agreement anyway, given that Donald Trump pulled out of the Iran deal—and now the INF?

And we should create conditions making it possible for North Korea to denuclearize and reduce the risk of nuclear war due to blunder, accident or miscalculation:

1) Adopt a policy of No-First-Use of nuclear weapons—a policy that is now receiving new support from top Democrats in the House and Senate;

3) Move away from our current nuclear war-fighting posture;

4) Require Congressional approval before any administration takes the U.S. to war or engages in coercive regime change;

5) Pursue an enduring multilateral denuclearization agreement with China and Russia who can work to keep North Korea in compliance if the current or a future U.S. president pulls out.

As we make progress on this agenda, we in Hawaii, the most remote island chain in the world, can take some comfort, and go back to being a backwater off the nuclear map.