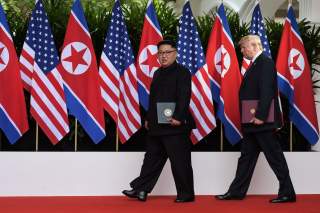 It is unlikely that President Donald Trump will be able to convince North Korea to lay down its nuclear weapons system, despite some excellent—if unorthodox—displays of diplomacy. Trump’s approach in the North Korean negotiations has been distinct and offered a combination of pressure, unpredictability, flexibility, respect-culture, and cultivation of the personal touch.

The “maximum pressure” approach toward North Korea was unprecedented, not merely in the sanctions—particularly secondary sanctions—field, but also in the sector of military pressure. For all the decades of American experts telling us that China had no leverage in North Korea, Trump proved that pressure applied to on Chinese could be very effective, indeed. Presidents Obama and Clinton had asked Beijing to help them. It made North Korea America’s problem. Trump raised the spectre of war on China’s doorstep. Suddenly, it made North Korea China’s problem. North Korea quickly folded under the double pressure.

The real question is can Trump deliver? While the summit at Singapore had little meaning in real terms, it was the starting gun in a long, drawn-out process in which we have seen both signs maneuver with much fanfare, but with little actual progress. We also now have the spectre of the second summit (in Vietnam), announced during Trump’s State of the Union address. Seen against the light of Kim’s own New Year’s Day address, it is unclear where the two can compromise. In his address, Kim summarized North Korea’s economic situation—in terms of the second part of his Byungjin policy—now called the “new strategic line.” While this appears to emphasize North Korea’s economy, it is unclear whether or not the North believes this will entail denuclearization as the United States understands it.

In the speech, there are other “promising” signs that are actually quite worrying. First, he portrays North Korea as a responsible nuclear weapons possessor, which strongly hints at his continued belief in an India-style deal whereby he is allowed to keep his weapons. Second, it is becoming increasingly clear that the North Korean regime is confident it can de-link the United States from its South Korean ally, something to which the progressive Moon Jae-in government’s deal-at-any-cost approach has unwittingly contributed. Given the country’s role in hosting U.S. troops and upholding sanctions, it is a vital part in sustaining Washington’s maximum pressure campaign should talks fail. The North Korean leader’s confidence is a disconcerting sign of the unraveling of the U.S. position. Whether Donald Trump can rectify these structural issues remains to be seen.

Dr. John Hemmings is Director of the Asia Studies Centre at the Henry Jackson Society and an adjunct fellow at the Centre for Strategic and International Studies. He is based in London.