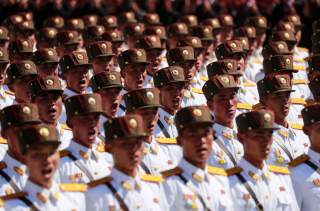 With the second summit between President Donald Trump and Chairman Kim Jong-un (KJU) looming at the end of February, questions abound over how the meeting will play out. All eyes are on whether President Trump can convince KJU to commit to a path towards bona fide denuclearization.

That said, not even the most optimistic amongst the peninsular observers are expecting a complete, verifiable, irreversible denuclearization (CVID) outcome.

KJU will surely reaffirm his pledge made during the first summit in Singapore to work towards a complete denuclearization of the Korean peninsula. To convince the world of his sincerity, he’s expected to scrap Tongchang-ri missile facility in the presence of international media and experts.

This is not something new. Back in June 2008, a twenty-meter cooling tower at the Yongbyon nuclear facility was blown up as a sign of Pyongyang’s commitment to denuclearization. In return, Washington removed North Korea from its terror sponsoring state list. Then in May 2018, the entryways to the tunnels at the Punggye-ri nuclear test site were also blown up, helping to bring about the first U.S.-DPRK summit in June.

Such dramatic and symbolic steps produced political dividends for North Korea, but did not reverse its nuclear programs. After all, Yongbyon remains operational even today while Punggye-ri’s destruction is considered non-permanent.

Washington has to understand why North Korea remains obstinate. Nuclear weapons to North Korea are not just about ensuring regime survival. If it was, promises of security guarantee and substantial economic aid should have reaped better results in the past.

North Korea has a grand strategy and it centers on its nuclear weapons. Nuclear weapons are the key to unlocking its goal of unification. The leverage gained through nuclear talks allows for an opportunity to disrupt the U.S. Forces Korea, the Combined Forces Command, and the UN Command—the three pillars of the U.S.-ROK security arrangement. It’s not a coincidence that major joint military exercises have been reduced, cancelled or postponed in 2018 per Pyongyang’s demand.

In Vietnam, should Trump relent on the issue of “ending” the armistice to replace it with a peace treaty, the existing forces structure, which prepares for war, not peace, will be challenged. This is the danger of ending the armistice treaty.

Trump must understand that the future of the alliance and the Korean peninsula depends on his nuanced negotiations with Kim. The political stakes are very high and they should not be risked in favor of a flawed nuclear deal.

Prof. Jung-Hoon Lee is Director of the Institute for Modern Korean Studies at Yonsei University and is ROK government’s former Ambassador for North Korean Human Rights.