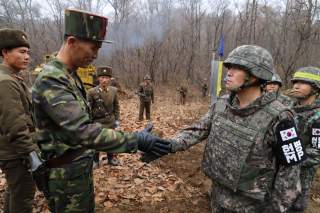 I think there are two potential outcomes to a Trump-Kim summit.

One is that negotiations break down and things get very dicey. This could result from Kim clarifying that there are no circumstances under which he will unilaterally denuclearize; that the DPRK means what it has always meant by “denuclearization”, which is that all threat of the use of nuclear weapons must be removed from the peninsula (i.e., the U.S. must withdraw its nuclear guarantee and all strategic assets from South Korea and Japan) within a larger framework of global denuclearization (i.e., DPRK will give up its nukes when everyone else does). It could also result from the U.S. team insisting on DPRK actions without any of the DPRK’s required “corresponding measures”.

The other possibility is that an agreement is reached, and it essentially gives the North Koreans most of what they have always wanted, primarily legitimacy as an equal partner (already conceded by the U.S. through agreement to bilateral negotiations, one-on-one meetings between Kim and the U.S. president, and a commitment at Singapore to “normalize” relations between the two countries); admission to the community of states (if sanctions are lifted and if an end to the Korean War is negotiated); and recognition as a nuclear power (if the Trump administration recognizes reality and backs off of the “denuclearization” language, agrees to an inspections regime, etc.)

It’s hard to tell which of these is more likely, but I think the latter has a slightly better chance; Kim knows that he has a window of opportunity with this U.S. administration that he should not waste and Trump wants a win.

It’s important to recognize that there is now no possibility of negotiating for the DPRK to give up its nuclear program. There is absolutely nothing the U.S. can offer the North Koreans, and no pressure it can apply to them, that will make them get rid of this capability. The danger of the first scenario happening arises largely from the possibility that there are still members of the Trump team who think that this outcome is possible and may try to achieve it.

At this point, the United States’ best choice is to accept North Korea’s nuclear status and try to manage the problem, but managing the problem will require Chinese assistance, and cannot be achieved through bilateral negotiations with North Korea. We may get an agreement, but it will not be a win.

Lindsay P. Cohn is an Associate Professor at the U.S. Naval War College.