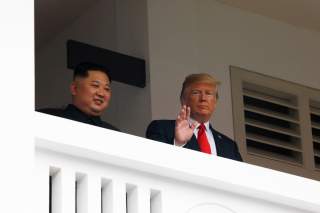 North Korean leader Kim Jong-un won’t give up his nuclear weapons (in 2019 or thereafter). He will look to extract further concessions from President Donald Trump while giving up as little as possible. Ideally for Kim, he would continue to work on North Korea’s nuclear weapon and missile programs. The summit won’t achieve North Korean denuclearization (as this term is understood by the United States and its allies) but may distract U.S. voters from Trump’s domestic challenges and actually further convince Kim that his nuclear weapons realize otherwise elusive concessions (and make him less likely to give them up).

A grand bargain whereby Kim does away with his strategic weapons in exchange for Trump doing away with the South Korean alliance, as much as President Trump may want such a deal, is also unlikely given that whoever succeeds Trump could reinstate the alliance more quickly than Kim could redevelop the nuclear weapons he forfeited. A peace declaration and possible even further sanctions relief for North Korea may be likely, but this won’t count for much over the long-run as the North Korean nuclear threat to the United States accelerates.

Whether Trump will decide that his policies have actually done little to do away with North Korea’s nuclear weapons is hard to predict, but insofar as this would be a tacit admission of failure he is likely to persist with current policies and believe that they have been successful. I, therefore, predict that Trump will only turn to a discernibly tougher approach if North Korea exhibits provocative behavior like further nuclear and missile tests. The Moon administration has been in a tough position since it promised that North Korea was ready to do business on denuclearization but has little to show for it other than reduced tensions in 2018 that may have been overdetermined given North Korea’s significant nuclear and missile progress.

There is always a prospect of war—which on the Korean peninsula means nuclear war—that is worth taking very seriously. I worry that tension will follow this short term détente as soon as Kim or Trump believes that he has not got what the other promised and believes that nuclear threats or tests might realize this. Moreover, a mistimed or misperceived tweet from President Trump or a U.S. or South Korean aircraft or submarine unintentionally crossing into North Korean airspace or waters could convince Kim that Trump has decided to take down his regime and that he must (rationally) test a nuclear weapon or worse to deter President Trump from this course of action.