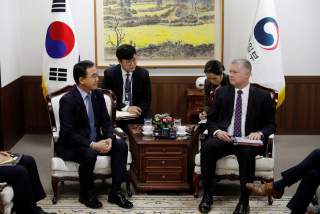 A sequel reunion between President Trump and Chairman Kim will be indecisive, achieving at best a partial step in the direction of denuclearization.

The announcement of a couple of meaningful denuclearization measures would represent tangible if still reversible and limited progress. President Trump should ensure success by having his team negotiate these measures in advance of the leaders’ meeting.

The Singapore summit solidified nuclear and missile testing moratoria, but it did not necessarily halt Pyongyang’s nuclear and missile weapons production. Now is the time to start the process of eliminating existing facilities, activities, and capabilities associated with North Korea’s nuclear weapons and their means of delivery.

Without a full declaration of North Korea’s capabilities, a roadmap will have to be assembled in tranches based on actions and not words. If several installments of the roadmap are filled in by 2021, rapprochement with North Korea can be sustained. However, if the costs outweigh the benefits, then Washington will need to expose the peace process as a sham and revert to a hardline policy of containment, deterrence, and maximum pressure.

President Trump was right to explore the possibility of peace, but the path toward détente has failed in the past and may well fail again. There are fundamental reasons why the United States and its allies have been locked in a Cold War with North Korea since 1953. Kim can ill afford to quickly abandon all his nuclear weapons, and he undoubtedly expects to remain the sole leader for the duration of his life.

Even so, we can offer Kim incentives. A political declaration of peace, but not a formal peace treaty, can be used once North Korea has committed to major denuclearization steps. Incentives can also be telegraphed now through dialogue on two issues: ways to support inter-Korea projects enumerated last year at Panmunjom and Pyongyang, and how to establish an escrow fund with access pegged to a future crucial point in the denuclearization process.

Small inter-Korean infrastructure projects and a large fund for the future may be insufficient to woo Kim, but he ultimately must make a historic choice: does he want to be the father of a modern North Korea?

Dr. Patrick M. Cronin is the Chair for Asia-Pacific Security at the Hudson Institute and the co-author of the forthcoming report, Negotiating with North Korea: How Does This End? Follow him on Twitter at @PMCroninCNAS.