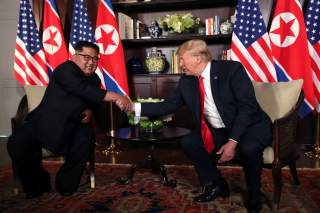 Forecasting what North Korea will do is hard because it largely depends on the uncertain will of Kim Jong-un. Forecasting what the Trump administration will do is often hard too because President Donald Trump can be impulsive and is willing to do things previous administrations would never have done. The upcoming summit could dramatically shift the politics of the Korean peninsula or it could amount to nothing. It wouldn’t be a surprise if the talks were called off at the last minute.

Nevertheless, we can probably say with confidence that North Korea isn’t giving up its nuclear weapons any time soon. North Korea has never given up a part of its weapons program that really meant anything in twenty-five years of talks. It might agree to dismantle a weapons site or commit to stop testing. But there are simply no “corresponding measures” the U.S. could take that would guarantee North Korean security—or Kim’s own life—the way the threat of nuclear reprisal does. That’s the assessment of the U.S. intelligence community too. North Korea, as Director of National Intelligence Dan Coats told the Senate Intelligence Committee, “is unlikely to completely give up its nuclear weapons and production capabilities because its leaders ultimately view nuclear weapons as critical to regime survival.”

There is maybe a 15 percent chance that we could see—if not after the summit, then sometime later in the year—a formal declaration of peace. After almost seventy years, both North and South Korea would like to declare an end to the Korean War. South Korean President Moon Jae-in is committed to improving relations with North Korea. The U.S. has been reluctant to legitimize the North Korean regime without substantial concessions. The U.S. may also fear that peace would make the U.S. military less welcome in its strategic South Korean bases. But President Trump is looking for a foreign policy win and may be less concerned with those issues. And if North Korea and South Korea are finally ready to make peace, the U.S. may not be able to stand in the way.

Robert de Neufville, M.A. is the Director of Communications at the Global Catastrophic Risk Institute. He is also a freelance writer and a “superforecaster” in Good Judgment, Inc.