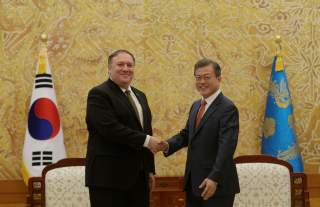 The president and the chairman are supposed to meet at the end of February. Their experts have already met to prepare the way. This suggests that the two leaders, who have personally invested in summitry, will know beforehand what they are going to get out of the meeting, and will only show up if they think they will be able to characterize the outcome afterwards as “successful.” The key for Kim and Trump, as for the rest of us, will be the standard for success. How low will the bar be set? Last time, it was set quite low and they barely cleared it. This time, it stands to reason, it will have to be higher.

At a minimum, there should be something of substance accomplished. For example, the North might agree to dismantle facilities at Yongbyon under international inspection, in exchange for some political move by the United States towards normalization of relations, or some relief from bilateral or international sanctions. This would be both a step towards denuclearization and mark the end of the implausible American position of insisting that the North give up everything before the United States gives up anything.

Other reciprocal moves are easily imagined, but more important would be some agreement on a process for engagement going forward, below the level of summitry. The idea is that the two sides would agree to have their diplomats meet someplace to carry on the negotiations. So a “low bar” would include some substance and some process—neither of which did we get out of Singapore, assertions to the contrary notwithstanding.

Also, in order to succeed, the meeting will have to meet the standard of the Hippocratic Oath and do no harm. For us that means that our guy will at least have to avoid concessions that would thrill the North, but scare the South. Last time he apparently gave up joint military exercises without consulting the U.S. or ROK militaries. This time the South Koreans worry that the president will do something to signal his willingness to relax the pressure for denuclearization in exchange for removal of the ICBM threat to the American homeland. So let’s hope there is no reason for such worry and, more generally, that we can get through this next bit of high level diplomacy with our alliances intact.

Robert L. Gallucci is Distinguished Professor in the Practice of Diplomacy at Georgetown University. During his 21-year government career, he held a number of key positions focused on international security including Ambassador-at-Large and Special Envoy dealing with the threats posed by proliferation of weapons of mass destruction and ballistic missiles, and Assistant Secretary of State for Political Military Affairs. He was chief U.S. negotiator during the North Korean nuclear crisis of 1994.