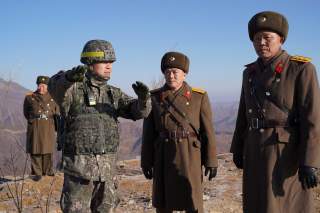 “President Trump is ready to end the war— it is over, it is done.” A key point Stephen Biegun drove home in his Stanford speech was the need to “close the door” on the Korean War, with the understanding that Washington has its work cut out in the next few weeks to find a workaround to the core bilateral issue of denuclearization. We expect a series of meetings between the U.S. and North Korea until Vietnam.

From Biegun’s statement, we are inclined to think that the Trump administration has resolved to find a settlement with the Kim regime, one that potentially allows North Korea to make fragmentary concessions on its nuclear and missile programs in exchange for windows to economic engagement—and perhaps, “much, much more.”

Trump-Kim 2.0 portends Washington’s concessions in view of a broader perspective and goodwill vision in weaving and integrating Pyongyang into Northeast Asia’s regional tapestry. We know that in the coming weeks the two sides will determine what “corresponding measures” Washington will slide across the table to Pyongyang—a roadmap of negotiations to narrow the divide between the U.S. and North Korea. Small or significant, a deal as alluded to by our negotiators would likely leave behind a nuclear North Korea, closer than ever to becoming legitimized as a de facto nuclear state, with Kim Jong-un in better international standing as a peace-loving leader.

Soo Kim is an opinion contributor at The Hill and a former CIA North Korea analyst where she focused on the country's leadership, nuclear proliferation and propaganda. She was a 2015 National Security Fellow at the Foundation for Defense of Democracies, where she authored a monograph on the South Korean nuclear program. You can follow her on Twitter at @mllesookim.